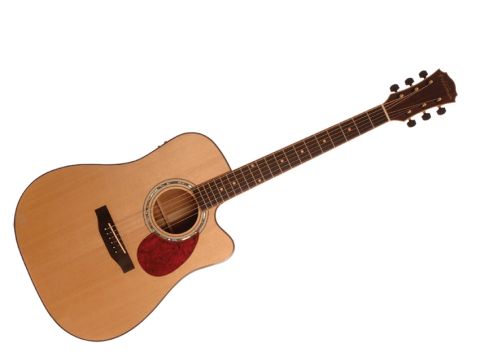 The 4DC is yet another successful mission for the Apollo team.

So many electro-acoustic guitar necks are slimmed down to entice electric players these days that the pleasantly plump example on the new Freshman Apollo 4DC took us by surprise.

Don't get us wrong, it's not a tree-trunk but it is a real palm filler. We'll look at the benefits of that extra beef in a moment.

We're looking for a lot of guitar for £699. Sure enough, the spec list reads like a woodpecker's dream menu. For starters, Freshman has spec'd all solid tone woods for the Apollo 4DC.

The Fishman Presys Dual Blend preamp comes loaded with a bunch of knobs and buttons that includes a master volume, three-band EQ, notch and phase controls to suppress feedback, and an on/off button for the onboard tuner.

Switching the tuner on mutes the preamp output, which will come in handy onstage. Eyeball the control panel and you'll notice the intriguingly named mic blend knob.

Flip the hinged preamp open to access the nine-volt battery and you'll see a small bug-shaped microphone. This picks up the sound inside the guitar's body to add some 'air' when blended with the under-saddle piezo pickup.

The Apollo pumps out plenty of volume and a well balanced tone when played acoustically. The stability of that plump neck works great for alternate tunings.

There's no noticeable flexing in the neck when you tune up or down. Drop the low E to D and there's still plenty of tonal definition.

Our guitar has a medium action, which will give inexperienced digits a workout but the reward is tonal clarity and buzz-free performance.

When you plug the Apollo into an amp, turn the mic blend control fully anti-clockwise. This gives you under-saddle piezo on its own, a setting that we think works best for a controlled rhythm sound.

Gradually rotate the blend control to bring in the ambient mic. This adds some depth and warmth to counter the bright piezo tone, and it's great for fingerpicking and slide playing.

Turning the blend knob fully clockwise dials in the mic on its own. While the output is much lower, the tone is sweet as a nut.

When you're spending £699 on an acoustic you can either blow your wad on a basic spec US-made model or plump for a fully loaded example built in the Far East.

Unless you're an incurable label junkie, the spec'd out Chinese-made Apollo makes that choice a bit easier. If reviews of Freshman guitars are becoming predictably positive that's because these guys always hit the bullseye when it comes to spec, tone and playability.