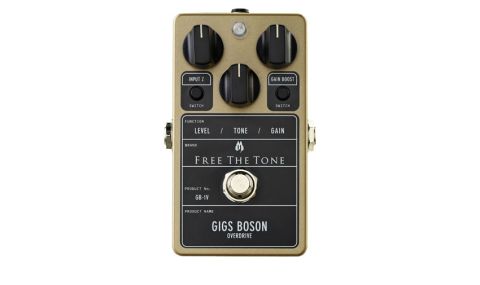 There are a lot of people out there looking for an overdrive that isn't as mid-heavy as a Tube Screamer, not as ubiquitous as a Boss Blues Driver, more versatile than both and slightly 'boutique' to boot. Fulltone's OCD ticks that box, and we'd say the Gigs Boson does, too.

Higgs Boson is the particle that might have been discovered in 2012, and that might hold lots of answers to all kinds of things such as, ooh, the structure of the universe. Finding it is not entirely unlike finding the perfect overdrive for a lot of us. Thus, the Gigs Boson [still smiling - Ed] seeks to fit that elusive 'sounds natural/does everything/has enough gain' ideal by offering a range of tones from a little fattening through to full, singing drives.

In addition to the basic rotaries, there are two mini push-switches. The first is a gain boost that brings, yes, more drive and gain; the second drops the input impedance from 1 megohm to 100 kilohms to reduce the level of the high- frequency range - think of it as a 'make smoother' switch.

Interestingly, the latter also works when the pedal is turned off. So, not true bypass then? Nope... Free The Tone's Yuki Hayashi has developed a circuit named HTS (Holistic Tonal Solution), which he says is a distinct, three-stage approach to the input, effect and output stages of the pedal.

You can read more on the website, but the bottom line is that he believes HTS addresses the inherent flaws in both true bypass and buffered pedal circuits. It's a highly evolved approach: allegedly no tone loss, no unpredictable output impedances and a clear, strong signal all the time, every time.

There's a huge range of gain on tap that has a bluesy flavour in the main, with plenty of extra harmonics and overtones that conjure the words 'fat' and 'smooth', without turning bloated or indistinct.

Far from it; like Providence's Vitalizer circuit in its higher-end pedals, so Free The Tone's HTS circuit is presumably what's keeping the Gigs Boson so present and alive-sounding where plenty of other overdrives can sound a little flat.

Whether you're smoothing off some clean tones into slight breakup, or going for a more full-on, meltdown drive, this pedal is flattering to both humbuckers and single coils, always enabling your guitar to be identifiable under the gain.

The input impedance switch is subtle, but for reduced brittle high-end without losing too much of the good treble part, the 100 kilohms setting is ideal.