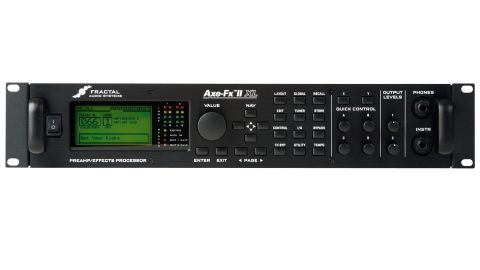 If you are thinking about becoming an Axe-Fx owner for the first time, the XL version is now top of the line, and we reckon the extra spend is justified.

When we reviewed Fractal's Axe-Fx II we concluded that it "offers the most complete and comprehensive facility for recording guitar that can be found in a single box." Now Fractal has released the upgraded XL model.

The new version retains the same amp modelling capabilities as the Axe-Fx II Mark II (2,349€), but offers expanded memory, new I/O ports, and a host of other upgrades designed to enhance its functionality.

For those not familiar with the Axe-Fx concept, it's a high-end rackmountable amp modeller with a long list of prestigious and professional endorsees. Axe-Fx units have very powerful DSP, and you can build a complete signal chain that comes close to the sort of recorded sound an experienced engineer with great gear and mics and a good recording room would achieve.

They feature loads of accurate-sounding modelled amps and effects with a high degree of flexibility in sound creation, routing and control.

New in the XL model is an optical encoder in the Value knob - which offers a projected longer lifespan - and 128Mb of non-volatile Super-FLASH memory, increasing storage capacity to allow 512 onboard presets and 512 user cabinets. (Fractal says there is enough memory to store 1,024 of each but is saving half for future upgrades).

Also, the size of an individual preset has doubled, which allows for expanded functionality, including X/Y switching on more blocks and more instances of effects.

In terms of connectivity, the XL has a dedicated MIDI Thru jack, which provides lower-latency MIDI relaying than the previous shared Out/Thru jack, and an extra pedal jack has been added so you can connect another expression pedal.

The input for plugging in your guitar has also been improved: it features new circuitry that includes Burr-Brown op-amps for a lower noise floor.

While it's possible to use an Axe-Fx as purely a studio unit without switching/changing sounds on the fly for live use (and more animated use in a recording session), there's a foot controller, the MFC-101 Mark III (with a whopping 21 footswitches! - €799), that now connects to the XL via a FASLINK port.

This innovation means that you can connect via standard XLR cables rather than the CAT-5 ethernet cables used by previous versions, which is, in our view, a much more practical option for gigging musicians, as it's probably easier to find a spare XLR cable in an emergency.

Okay, any version of the Axe-Fx II is no casual purchase, it's a professional tool with a serious asking price. Basically, both the standard and the XL will give you the same sound but the XL includes upgrades that, while probably not enough to tempt anyone who already owns a Mark II to trade up to an XL, are very useful additions.