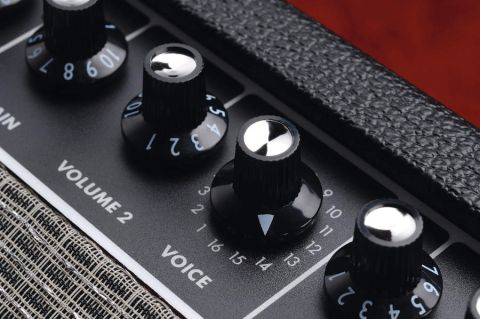 This amp bridges the gap between a practice and gigging unit, and if you're in the market for a fistful of all-valve Fender combo yet find your wallet wanting, the Super Champ XD is an option to consider seriously.

The inclusion of modulation effects within Fender amp circuits has a long history. The tremolo-equipped Tremolux, introduced in 1955, and the 1956 Vibrolux boasting a sumptuous vibrato, are just two examples from the illustrious annals, while that classic spring reverb is a significant part of most people's definition of the 'Fender sound'.

The new Super Champ XD, introduced into the Vintage Modified series, mixes an all-valve configuration with a number of specific preamp voicings and on-board DSP effects.

"Small, inexpensive, bang-for-the-buck valve amps are very popular these days," says Fender's Shane Nicholas. "To answer the many requests for Fender amps of this type, we looked to some historical models and we thought it would offer more value for money and 'fun factor' if the next two models had a full DSP complement rather than just spring reverb and/or tremolo. So we added digital effects and modelling to the basic power amp platforms of the vintage models: our engineers made it work!"

Featuring the Blackface livery admired the world over, and offering a low output and straightforward operation, the Super Champ XD and its sibling the Vibro Champ XD are likely to have a wide appeal.

"For the experienced player who wants a low-volume valve amp for home practice, recording, jamming, or just another fun toy to mess around with, the XD models are a very affordable choice," continues Shane.

"These amps also appeal to less-experienced players who are interested in valve amps, but aren't ready to make the leap to, say, a Hot Rod Deluxe or Deluxe Reverb amp. Also, the variety of distortion voicings and effects will let them play any style of music they want."

The Super Champ XD offers a 16-way rotary encoder that selects a number of preset preamp voicings that drastically alter the basic tone which can, of course, be tailored further by experimenting with the amp's output stage.

The majority of the voicings are based - rather than authentically modelled - on classic Fender amps. The Tweed and Blackface sections each offer three choices based on differing drive settings and you can alter the amp's gain pot to suit.

There are two full-blooded metal tones, a soupy jazz option and even a pseudo acoustic tone based on an Acoustasonic. Add three British settings that tip their hat to either Vox or Marshall, and you theoretically have pretty much any tone you could realistically need.

The two-way EQ is extremely efficient too, which is important, as we'll discover, The Super Champ, rated at 15 watts and utilising a 10-inch Fender Special Design speaker, boasts a pair of 6V6 power valves alongside a single 12AX7.

It should be pointed out here that although the amplifier utilises a valve power amp stage, the preamp distortion and high-gain overdrive options are provided by solid-state circuitry.

Although only the level of the onboard DSP effects can be controlled in real time via the dedicated control on both front panels, each specific effect is offered with a number of set yet different parameters: the delay, for example, is available in three contrasting lengths.

There are 16 effect presets in total which include the three delays, a trio of tremolos and a number of classic reverbs. It's also possible to combine a reverb with delay or either with a chorus thanks to a thoughtful inclusion of such a mix within the FX Select control's parameters.

The Super Champ is a two-channel affair and we should point out that although the effects are available on both, the voicings are restricted to Channel 2. Still, if you use the optional two-way footswitch you can take advantage of a modicum of versatility by flicking between channels and switching your chosen FX selection in and out.

Click the clip below to hear various examples of the Super Champ XD in action:

The classic Fender voicings are all present and correct and although we'd never suggest that the XD combo offers a better tone than a vintage Twin or Bassman, the relevant voicings are certainly in the right ballpark.

Voicing Two, described as a fat Fender Bassman, is excellent fun to play around with and adding reverb and delay gets you straight into mellow rockabilly territory.

The heavily-driven Blackface voicing is sheer Stevie Ray, offering the classic vibrancy of a 6L6 power valve with a sweetness afforded by a Strat's neck pickup: for extra sugar, the spring reverb effect is excellent.

The metal settings, while satisfyingly filthy, tend to be very toppy indeed, so be prepared to roll three-quarters of the treble off in order to keep your skull intact.

Elsewhere the tremolo is warm and throbby, as is the Vibratone, and although we found the chorus a little too mechanical for our tastes, the provision of adding reverb or delay is a sensible one to improve proceedings.

The unqualified ace in the hole is apparent when you hook up the Champ to a bigger speaker cabinet. We used our stock Orange 4 x 12 and found that, with the cab's additional projection and headroom, the Super Champ XD is loud enough for small gigs.

What's more, the Fender tones really come into their own and have some of the sharper textures sanded off with ease. It's just a shame from a gigging perspective that the amp isn't ever so slightly more versatile in the switching stakes, but at this price it's perfectly understandable.