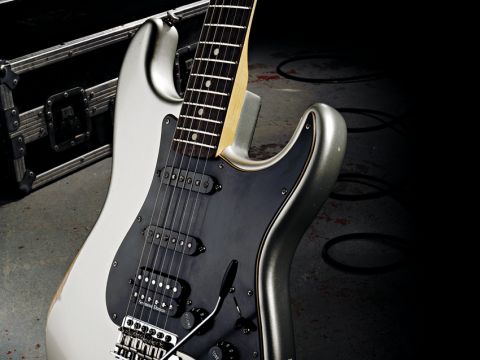 We're not sure about the colour, we miss the bridge single, and we're still dubious of the price - but this road warrior is well worth a test drive.

Some statistics don't just beggar belief, they bugger it. For instance, there are 57 different Stratocaster models on the Fender website in 2011. That's a fact. We've just counted them.

As such, your initial reaction to this Road Worn Player Series HSS model might be a weak smile and a limp thumbs-up, of the sort that Lemmy probably gives when groupie No 50,493 walks into the hotel room.

To be clear, it's not that we're bored of the Strat design: it's just as drop-to-your- knees fantastic as it was in 1954. We just can't shake the feeling that we've seen it all before. Hold that thought.

By now, you'll be aware of Fender's original run of Road Worn models: the pre-distressed faux-antiques that impressed, but raised some eyebrows over the financial mark-up.

Fender's new three-strong Player Series "takes the experience a step further" with a more adventurous spec, but there's no cutback on HSS's price, which at £1,020 is a pocketful of dollars more than a stock Mexican Strat.

The first feature prompts a shrug of the shoulders. The distressed finish probably is more convincing than before, but it's cancelled out by the duff colour choices (red or silver… seriously?).

Physically, though, the HSS is beyond reproach. The body is your stock-as-a-rock doublecut, which means it's a cliché but a very comfortable one.

The neck is more interesting. If you go straight from a '50s reissue - with its weeny seven-and-a-quarter-inch radius - on to this model, you'll find it's a killer for wide bends without choked notes (although it's more of a stretch to move chords around). We also prefer this 'C'profile to the old-school 'V': it fills the palm and gives better support.

Still, these are hardly unique selling points; virtually all modern Strats have this radius/profile. Where's our money gone?

Inevitably, you have to look to the pickups. The twin Texas Specials are ace. They're running a little hotter than some Strat singles, with a funky snap that's always ready to break into a lean, pebble-dashed distortion. We love the Pearly Gates as a standalone setting, too. It's a bassy, beefy, brick-wall of a bridge unit that's a natural for supercharged leads.

But for traditionalists, it's not all good news. One of the defining voices of the Strat is surely the Jimi-tastic fusion of middle and bridge singlecoils.

The sad truth is that this tone is missing on the HSS, and while there's added punch, there just isn't as much chemistry between these mix-and- match units. Horses for courses, but purists will want to investigate the series' SSS configuration Strat for the same price.

It must be a headache designing Strats in 2011. Stick too close to the '50s blueprint and you'll be accused of treading water. Change too much and you'll have the purists on your back.

Ultimately, the HSS does a damn good job: it's still very much a Strat, but it's an interesting one.