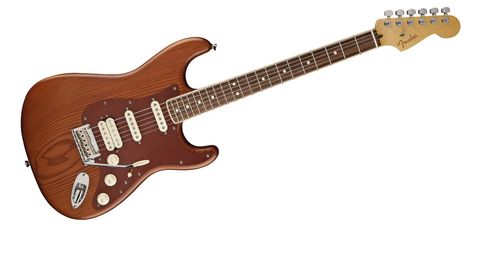 While the redwood adds visual and sonic interest here, this is simply a great-sounding Strat.

Not the snappiest-named Fender Strat we've played this year, but one of the best...

There's little doubt that an underlying trend in the past few years has been the use of more unusual woods for the manufacture of our instruments. The declining supplies of certain key woods means that prices are escalating, and we all have a limit to what we want to pay.

Rather than using lower grades of wood, numerous makers have investigated different hard and softwoods. In such a competitive market, cost or environmental concerns are one thing, but simply having something different can make a refreshing change.

Fender's 'Telebration' Telecaster series introduced us to some unusual body woods, from rarely used mahogany to Lamboo (laminated bamboo), empress and reclaimed old-growth redwood, which is used here to fashion this USA Strat.

It was originally used, says Fender, "in the 1933 construction of road bridges spanning Walker Basin Creek and Caliente Creek, just east of Bakersfield, California." Redwood trees are among the largest and tallest in the world, and an endangered species - hence the use of reclaimed wood here.

Its strong pine-like grain and subdued terracotta hue gives a very different aesthetic, and it's oil finished, like the maple neck, which means it'll need some maintenance - although we suspect that with playing it'll burnish up and get a little dirty. Nice. It's a good medium-light weight, too, and unusually for a Fender body, one piece.

But it's not the only nice touch here: there's the brown anodised aluminium scratchplate; the neck is 'channel bound' - the rosewood fingerboard is inset into the maple, leaving a 'bound' edge.

The 'board itself has a conical 241-356mm (9.5-14- inch) radius and medium jumbo frets that, in combination with the modern C profile, make for a very fast, modern player. The two-post vibrato has bent steel saddles and is nicely set up.

It's powered by a medium-output Diamondback humbucker at bridge, with two American Vintage '65 'gray bottom' single coils in the middle and neck positions, along with a standard five-postion lever pickup selector switch, master volume and neck and bridge tones.

Whether it's the lack of finish, or the wood, or both, there's a very textural, resonant character to the sound without the overly glass-like percussion of some Strats.

It's a little warmer and less peaky, really suiting the humbucker - which has an excellent classic-rock kick with crunchier amp voices. Although the single coils are quieter in output, they match very well in tonality.

Played clean, it sounds sweet and mellow: it might be a special edition, but here's a Strat that really needs to be played.

As we found with many of the Telebration Telecasters, changing the body wood retains the instrument's character but alters the sonic backdrop, if you like. That's certainly the case here.

Aside from being a very tidily built USA Strat with a really great feel, its slightly woodier and more mellow tonality has plenty of practical applications. It also looks fantastic. This guitar is one for the sonic connoisseur.