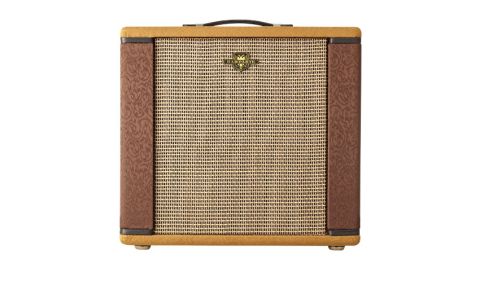 Not every player's cup of tea, but for retro rock or indie styles the Ramparte could find a big fanbase.

Fender has enjoyed considerable success with its Pawn Shop Special range of guitars and amps - a quirky mix of original designs and new takes on well-known models, at prices guaranteed to appeal. Like real secondhand shop bargains, you also have to make a quick decision before someone else beats you to it, as was the case last year with the massively oversubscribed Excelsior amp. Like the Excelsior, Fender's new Ramparte also combines boutique looks and features with a bargain basement price.

The first thing you'll notice about the Ramparte is its fabric covering - a two-tone blend of antique gold and chocolate brown patterned upholstery cloth that might be more at home on your grandma's sofa than a guitar amp. Combined with a cloth grille and a cheesy gold eagle logo, the Ramparte's looks certainly evoke a 50s vibe.

Inside, however, the circuitry is very modern and as you might expect, PCB-based, with two large boards holding nearly all the components, including the valve bases and front panel controls. Wiring is minimal: the two boards are connected by ribbon cables and the whole thing is contained in an adequately strong open-ended steel chassis.

The Ramparte is a single-ended pure class A design producing about nine watts of power from a single 6L6, driven by a pair of 12AX7 preamp valves. The preamp design is about as simple as you can get: a pair of input sockets labelled Hot and Cool linking to a pair of similarly-named volume controls. That's it.

There are no concessions to modern players who might expect tone controls at least, let alone an effects loop and a speaker-emulated line out; the Ramparte is as uncompromising with its features as it is with its styling.

With no tone controls, the Ramparte's inherent sounds have got to be good for it to work, and by and large they are. Wind the volume controls up to around halfway and you'll get a useful, slightly overdriven rhythm sound from the Cool channel that cuts pretty well with single coils, while average output humbuckers are slightly too warm to our ears.

The Hot channel's higher gain is more of the same, with an aggressive distortion voicing that works best with similar guitars, such as the bridge pickup of a Tele, perhaps. It's throatier than a tweed Champ, but not as warm, with none of the glassy transparency of a Deluxe and too bassy for some humbuckers.

Turning up the volume controls beyond halfway thickens everything up even more, without adding much in the way of extra volume. Noise could be an issue for some potential customers; the Ramparte's best sounds happen at volume levels that are still quite anti-social, despite the modest nine-watt power rating, at which the amp's mains hum and hiss goes unnoticed.

However, if you turn the volume down to conversation levels the mains hum becomes pretty intrusive, possibly preventing it from being the well-mannered lounge lizard its styling suggests, and making a noise gate essential for studio use.

The 'boutique on a budget' concept behind the Pawn Shop Special range is a great idea, and Fender has hit the bullseye more than once with amps such as the Excelsior. We're less sure about the Ramparte. It's not quite powerful enough for live use on bigger stages unless it's mic'd up and monitored, and based on this sample, some may consider it to be too noisy for use at home or in the studio.

The good news is that when you do turn it up it delivers the goods, and then some. Of course, all of this has to be weighed against the price. If the Ramparte had been a Custom Shop project it might have a better low noise performance, but it would also cost upwards of six times as much! For the money, we think it is still pretty good value and there's no denying it does look cool if you're into that 50s retro vibe.