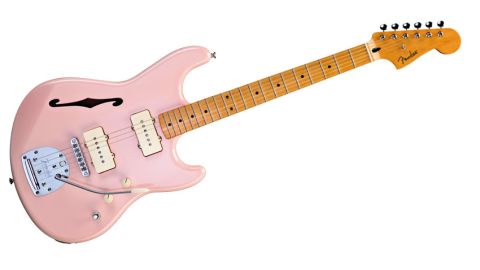 Less-obvious origins make this Pawn Shop Fender more original than most, and guaranteed to grab the attention of guitarists who go for something different.

Last year saw the launch of the first models in Fender's Pawn Shop Series, and these have recently been joined by another trio of six-strings. These Mexican-made additions maintain this line's mix 'n' match approach, by borrowing and blending parts and design features from various existing instruments to create Fenders that 'could have been' - either officially, or as the result of some serious aftermarket alterations. Here we look at the Offset Special...

Living up to its name, this Fender features an original body outline that combines Strat-style double-cutaway horns with a significantly sloping waist and lower bouts borrowed from the Jazzmaster.

The bolt-on neck plays it straight, but construction is one-piece maple, complete with an integral fingerboard. The latter is lightly radius'd, gloss lacquered and accommodates 21 frets spread over Fender's standard 648mm (25.5-inch) scale.

As well as its all-new sleekly contoured shape, the alder body incorporates a single long f-hole. This confirms the semi-solid construction, which helps keep overall mass to a meagre 3kg.

The review guitar's nicely applied Shell Pink polyester finish could be considered cool or a mite twee, depending on personal taste, but it effectively contrasts the Offset Special's cream plastic and chromed metal parts.

Pickups are a pair of JZHB humbuckers rather than normal Jazzmaster single coils. Size-wise, they look the same as the latter, and are also direct-mounted to the body (being installed in neatly executed cavities), but screw- type polepieces confirm there's something different under the large cream covers.

Circuitry is simple, with a three-way selector switch sitting below master volume and tone pots topped by cream, vintage-style Fender amp knobs to match the pickups. These controls are positioned quite a way up the body, putting them at more risk of being knocked during overly enthusiastic strumming.

The hardware appointments are completed by the same bridge and vibrato tailpiece found on the Jaguarillo. However, for whatever reason, the Offset Special's screw-in vibrato arm is a much tighter fit, providing a more positive feel, and usefully staying put in any position.

The internal airspace here adds some acoustic volume and a more rounded tonality, while plugging in reveals a lack of buzz, confirming the pickups' humbucker status. Even so, output is more modest than muscular, and they retain some of their single-coil cousin's typical character.

The neck selection supplies a woody warmth, with thicker mids, though it's a little lacking at the upper end. The bridge pickup is similarly slightly low on treble content, while the midrange becomes more nasal. Combining the two also introduces a hollow-toned, stringy sound that's nearer to a normal Jazzmaster.

When keeping things clean, the Offset Special seems almost subdued and polite, but matching this model's updated attitude, the pickups are much more suited to leading a gain-laden life, and work well for bluesy grit and brashy thrash. The volume pot proves rather abrupt in terms of any level changes, but the tone control is much smoother.

These latest mongrels from Mexico more than maintain the novelty aspect of the Pawn Shop Series, but still provide valid variations on familiar Fender themes - and you should bag either one some way below the quoted retail prices.

The Jaguarillo offers the styling and some key features of the Jaguar, but broadens its appeal by simplifying this oldie's circuitry, while adding a few Strat-style sounds and the upfront attack of a no- nonsense humbucker.

Looks-wise, the Offset Special owes nothing to any single Fender, but instead blends two famous shapes to create something entirely original. The electrics ring equal changes, and the end results should prove very attractive to the modern player who fancies something obviously Fender, but also out of the ordinary.