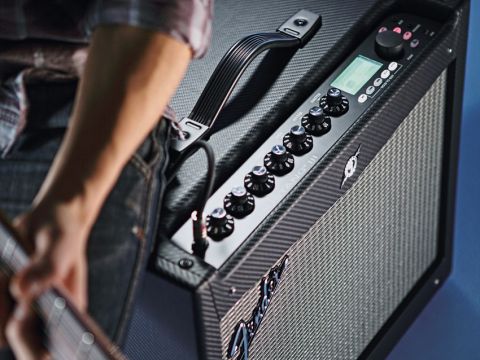 The Mustang III offers a vast array of usable tones for practise, recoding and occasional gigging. It's crazy value for money, too.

Hands up if you're confused about what amp to buy? The market is saturated with all manner of combos and heads that use valves, digital modelling or hybrid solid-state technologies to give voice to your pride and joy.

Check out the Fender Mustang III in action...

And do you want it for practise, gigging, recording or all three? And presumably it needs to be good value too? Fender's answer to all of those particular conundrums could quite justifiably be this.

The Mustang III follows its lower-powered I and II siblings with healthy 100-watt lungs and a single 12-inch speaker, yet it's still compact and light enough to carry comfortably with one hand, or fit in the boot of any sensible car.

Decked out in 'carbon tweed' with a silver grille cloth, it pulls off the modern-heritage aesthetic with aplomb. Likewise, a push-button panel with LCD screen and large data wheel sit beside classic 'Black/Silverface'-type knobs.

The cabinet is particleboard, while the jacks and switches are plastic and mounted directly to the PCBs beneath. This is exactly what we expect at the price and will be fine for normal everyday use.

On power up you're greeted by up to 100 presets that draw on a wide variety of amplifier and effects models. The digital signal processing is all new, according to Fender. You have 12 amplifier models at your disposal; Fullerton classics include the '65 Twin Reverb, '59 Bassman and '57 Champ, plus you have models that fall into classic Marshall and Vox territory (British 1960s, 1970s and 1980s) and more modern high-gain sounds (American 1990s and Metal 2000), for example.

To select one, just press and hold the 'amp' button and twist the data wheel to run through each in turn. Push the data wheel twice and you get to see the complete signal path of amps and effects.

It's the same process for stomp, modulation, delay and reverb effects. Together they comprise a wide ranging - if not comprehensive - selection of phasers, flangers, overdrive, fuzz, tremolo, wah, compressor, filters, Vibratone (rotary speaker), plus ring modulation and pitch shifting.

The delays and reverbs deserve special mention in that there's a wide selection of both, ranging from vintage-inspired tones, through to ultra-modern ambience.

Unlike some modelling amps, the individual effects parameters (drive level and tone, chorus depth, tremolo speed and so on) are adjustable too - just hit the data wheel repeatedly to move through the various options.

Back to the main pots, one important thing to remember is that the main control knobs aren't necessarily showing your actual settings. So, when you call up a preset, the knobs won't move, but the settings will.

To see exactly what's going on, hit the main data wheel once and you get a graphic representation of all your settings. If you want to change overall bass, treble, gain and so on, just twist any knob - which makes it active - and off you go.

Once you've selected your desired amp and effects models, hit save, choose the preset number you wish to save to, give it a name, and hit save again. Writing it is more complicated than doing it --rest assured it's easy after two minutes' fiddling.

There is a further editing option via the Fender Fuse software application; load it on to your PC or Mac, connect the Mustang III via USB, and you can edit your sounds to a deeper level.

Even better, via the Fuse application you can also save and share your sounds with other Fuse users around the globe, storing virtually endless presets on your computer. If you're used to any kind of computer recording or editing - or indeed using smart phone and tablet applications - this all feels like second nature.

Should you wish to play orrecord silently, there's a headphone jack that doubles up as a speaker-simulated recording out. If you're also using the aux in for your mp3 player, the sound through headphones is full-range, unlike the main speaker, which is optimised for guitar: great for a Strat, less great for an iPod.

Finally, the included two- button footswitch toggles you up and down through presets in its simplest mode. By making a change in the amp's utility menus, you can also tell it to take care of effects bypass and tap tempo, or indeed simply toggle between two quick- access presets.

If you want more functions at your feet, the four- button switch will cost you £70.80, though it's included with the Mustang IV and V.

The sounds available include Classic Fender tremolo-and-reverb-soaked cowboy-soundtrack cleans, bluesy neck pickup drive, brutish punky fuzz and singing delayed rock leads - the sheer breadth of sounds is to be expected; that each took mere seconds to dial up (without reading the manual) and still sound perfectly credible is the bigger surprise.

In the room, the Mustang III is no less satisfying; the partially open-backed cabinet gives the sense of spread and space you expect from a Fender combo, complete with spookily authentic reverbs.

If there's a criticism, it's that like many modelling amps, the Mustang III's friendliness makes it sound and feel closer to a great recorded guitar tone, rather than the visceral reality of a pumping valve amp's speaker.

The former is what most of our ears are used to of course, hence the strong first impressions; more challenging is the loud band scenario where - despite the amp's 100-watt power section - the Mustang III doesn't cut as well as, say, a Fender Blues Deluxe, especially with heavier gained settings.

But do you really play that loud? Be honest, because the debate has moved on when it comes to cost-effective digital modelling amps.

The Mustang III won't make the hairs stand up on the back of your neck like a mid-'60s Super Reverb, a tweed Deluxe or a MesaRectifier, but the more interesting observation is that precious few of us can actually exploit the 'real' thing, at 'real' volume in a 'real' environment in any case.

The 'real' experience for many guitarists is jamming at home, rehearsals and occasional pub or bar performance. For that, and thanks to its good sounds, portability, healthy output section and frankly ridiculous value for money, the Mustang III is a no-brainer.

It has pretty much every sound you can imagine and a whole load more that you can't. At this price, it's simply unbeatable.