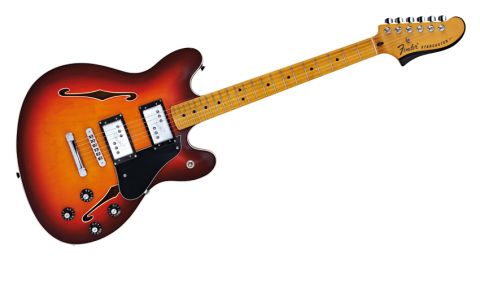 Fender's most polarising electric is updated with a few twists. The result? A cool and affordable platform for experimental indie guitar.

Anyone old enough to have been playing the guitar in the 1970s will probably screw up their face and tell you that the Fender Starcaster was a turkey, and an example of how the Big F had lost its way by the middle of that decade.

And, on paper, they'd have a point. Often cited as an example of Fender trying to get a slice of the semi-acoustic market dominated by Gibson, Starcasters didn't exactly fly off the walls of guitar shops, and the model was discontinued and exiled to relative obscurity in 1982.

With its offset body, six-saddle string-through-body hardtail bridge, master volume, three-bolt neck and a bold headstock design recycled from a mid 1960s Marauder prototype that never made it into mass production, the original Starcaster was an oddball; too out-there for fans of traditional semis, and not Fender-y enough for the devotees.

And yet, there's something strangely attractive about it. It's a leftfield choice, certainly, but not so much of an ugly duckling that it stops vintage examples commanding in excess of three grand. That high-profile indie players such as Radiohead's Jonny Greenwood and Dave Keuning of The Killers have used them extensively probably helped to drive up prices, too.

We'd heard whispers for years, but 2013 finally saw the Starcaster make a comeback, under the banner of Fender's Modern Player series and manufactured in China to keep costs sensible. Like other models in that series, the new Starcaster isn't a strict reissue; we now get a four-bolt neck join, simpler Gibson-style controls and an Adjusto-Matic bridge and stopbar tailpiece.

None of these changes feels like a compromise, and the comfortable medium C-shaped neck and 25.5-inch (648mm) scale length leave you with no doubt that this is a Fender when it comes to string tension and a snappy acoustic response. This gloss polyester Aged Cherry Burst finish is our favourite of the three on offer, and there's a hint of Cherry Coke in its red hue.

Plugged in, thanks to Fender's latest incarnation of the Wide Range humbucker, all three pickup settings have plenty of natural compression and a soft, slightly foggy high-end that lends itself well to intricate arpeggios and chiming indie chords when clean, smudging up nicely when you add drive and giving low-string riffs grunginess. Think latter-day Radiohead or PJ Harvey and you'll be playing to its strengths.

Spring reverb, crunchy analogue delay and a Pro Co RAT pedal are the Starcaster's friends, so if you're a tone hound looking for a guitar for Texas blues or a metalhead seeking bottom-end definition, this isn't the guitar for you: this is an instrument for indie kids who love effects.

We wish Fender had thrown in a case to house its unconventional outline, but that aside, it's great to have the Starcaster back. Wouldn't it be nice if there was a Bigsby version?