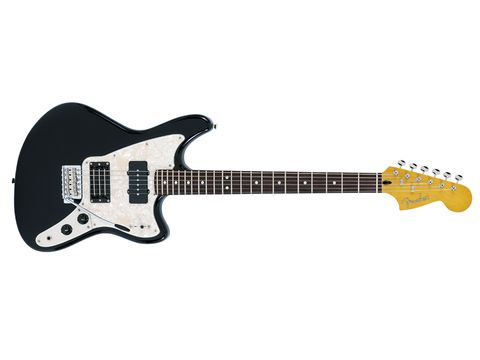 The Fender classic that never really was, now 'is'. Fender virgin or not, everyone should test-drive this cool alternative to the usual Strat models.

But don't take that to mean that there's not something interesting in the Modern Player range for you if you're one of the Fender faithful. In fact, there's one classic guitar in this latest lineup that has been 45 years in the making...

If you're up on your Fender trivia you'll know the Marauder model designation has been knocking about since 1965. Originally proposed as a top-of-the-line model with four pickups hidden under its scratchplate, manipulated via a shedload of switches and knobs, the guitar was quickly redesigned with three exposed single-coils.

Fender went as far as adding the Marauder prototype to its '65 catalog, but the model never made it into production and was history by 1966. Now, a mere 45 years later, the Marauder is back... albeit in a more simplified format.

While the new Marauder's slim 'C' profile bolt-on maple neck, classic 25.5-inch scale and vintage-style 'synchronized' vibrato are textbook Fender, there are a couple of surprises lurking on its spec sheet.

For a kick-off, the Marauder is the first Fender with a koto wood body. It's a light-coloured African wood that often ends up as a veneer on furniture. Whatever, the weight, tone and sustain of koto feels comparable to alder in our opinion.

An even bigger surprise is the guitar's Triplebucker bridge pickup. Paired with a Jazzmaster single-coil in the neck position, the Triplebucker might look a bit bonkers - gimmicky even. In actual fact it's a smart piece of kit.

Fender has squeezed the humbucker and two single-coil format of a hot-rodded Strat onto the Marauder's compact scratchplate. Flicking through the guitar's five-way switch you get the Triplebucker in its humbucking mode; all three coils on; the inside coil of the Triplebucker on its own; that inside coil combined with the P-90-style neck pickup; and the neck pickup solo.

Plugging the Marauder in reveals another big surprise. Switching from the Triplebucker's two-coil humbucking mode to its three-coil setting you might expect an increase in output. You'd be wrong.

The humbucker mode is infectiously bright and punchy and works great for heavy riffs and power chords. Switch to the triple-coil setting and the output decreases slightly leaving you with a warmer tone that's perfect for clean rhythm work and crunchy old school rock riffs.

The tonal palette is completed by some glassy single-coil sounds courtesy of the Triplebucker's extra coil and the neck position P-90. If you play blues, rock, surf, rockabilly, jazz, country, even metal, the Marauder will see you alright.

Both of the Modern Player guitars offer excellent build quality and features at a low price point. The Marauder, however, is the pick of the litter. It has the enduring retro appeal of a Mustang or Jaguar combined with the easy playability and tonal versatility of a hot-rodded Strat.

If any guitar can steer Fender virgins away from the competition it's the Marauder. But don't let the newbies have all the fun. It took 45 years for the Marauder to get here. You owe it to yourself to give it the once over.