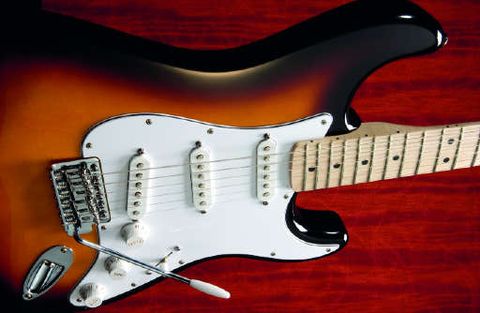 The Mexican Standard Strat benefits from subtle refinements that make for better playing and a better sounding guitar.

Of all of the electric guitar designs available on these shores, converse with anyone connected to music retail and they're likely to tell you that Mexican Fender Stratocasters and Telecasters are comfortably among the biggest sellers.

A combination of solid build quality, great value for money and that all-important Fender logo on the headstock ensure their enduring success with guitarists.

Despite this, Fender is keen not to rest on its laurels and instead keeps the range bang up to date and ahead of the competition. As a result, perhaps even the gap between these instruments and the more expensive American Series is narrowing.

That there is no more iconic electric guitar design than the Standard Stratocaster is a given, but it's reasonable to say that the periodical reorganisation of the Fender range and its demarcations might leave some prospective buyers scratching their heads.

There are just so many Stratocasters at so many price points these days that even we feel a little bewildered on occasion. Although for some, 'Standard Stratocaster' is a label that evokes an American-made instrument.

For the last couple of years, Standard Series Fenders have represented the bulk of the Mexican Ensenada factory's output alongside the Classic Series vintage reissues.

The Mexican Standard Stratocaster initially looks pretty much identical to its predecessor, but on close inspection there are a number of subtle, yet significant differences.

Immediately on removal of the guitar from the padded Fender gig bag - which is now included in the purchase price - the guitar's neck feels welcoming and sleek, with a thin coat of satin polyester varnish sealing the attractive one-piece white maple.

The ball ends of the strings are now anchored by a larger, higher mass bridge block to aid sustain and beef up the vintage-style synchronised vibrato.

Our only real reservation on a visual level is that the brown sunburst polyester finish applied to the alder body isn't the most attractive or vintage authentic of hues, and the sensuous, timeless curves of the Stratocaster body seem just a touch squarer and the guitar a little less svelte in this incarnation.

Electronically, there are no surprises, and the expected configuration of five-way pickup selector blade switch, master volume and individual tones for the neck and middle single-coils.

On flipping to the Strat's bridge pickup through a nice low-powered valve combo, it's immediately noticeable that the tone seems a little more robust than we expected, which in part must be down to the new bridge block.

It's never going to suit those bottom-heavy metal rhythm sounds, but it can cope comfortably with a huge range from Beatle-esque wiry jangle to ballsy alternative rock, especially with the sixth string tuned to D or below and more esoteric chord voicings employed in the case of the later.

A maple-necked Strat will probably always sound a touch brighter than a rosewood, so it's worth A/B testing both versions before choosing.

While the middle and neck pickups are not exactly oozing woody spank in quite the same way as a good vintage example or Custom Shop Time Machine, there's more than enough of the essential Stratocaster character to do the business in any of the myriad genres in which this instrument excels.

The neck position in particular is a superb voice for smoky electric blues and, when backed off, those cleaner Frusciante moments.

The 'in-between' positions two and four aren't quite as quacky as some, and although for some this is a good thing, the relative merits of such things are rather subjective depending upon exactly what you want from your Strat.

The new internal shielding seems to contribute to better behaviour in terms of extraneous noise, even when hooked up in front of a computer monitor.

Ultimately though, upgrading to noise-free units from the likes of Kinman or Fender's own Noiseless pickups is the only solution if 60-cycle hum is to be banished completely.