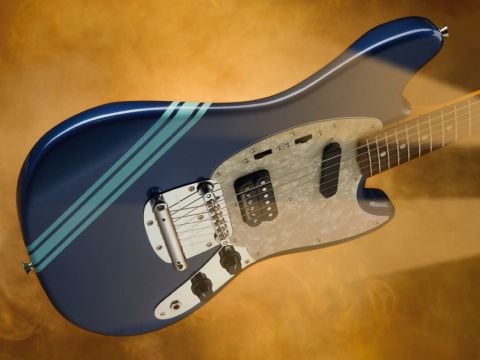 Fan or not, you'll find his new Mustang is pretty close to tonal Nirvana.

When Fender released the Kurt Cobain Jaguar last year we were blown away by just how brilliantly it had recreated the guitar that the Nirvana frontman played throughout the Nevermind tour. It was a triumph, plain and simple.

Now, as much as Kurt loved his modified '65 Jag, it wasn't his only guitar. He also loved the 1969 Fender Lake Placid Blue 'Competition Stripe' Mustang (serial number F279651) that he thrashed in the Smells Like Teen Spirit video. Naturally, when we heard that Fender was set to release a '69 LPB Mustang with a couple of classic Kurt modifications we began to salivate at the prospect of a faithful replica of just about the most iconic electric guitar of the past 20 years.

If you're anticipating a 'but', here it comes. The new Japanese-made Kurt Cobain Mustang is not a spot-on tribute like the tastefully executed Jaguar. Yes, the Dark Lake Placid Blue finish is correct, ditto the blue three-line 'Competition Stripe' that runs across the front of the contoured body.

That's great but there are some big differences between the two. While the new guitar has a plain wood headstock, Kurt's guitar was one of the original run of Mustangs with its 'stock' colour-matched to its body.

Also, unlike his other Mustangs, Kurt didn't modify his '69 with a Seymour Duncan SH-4 JB humbucker in the bridge position. He loved the guitar too much to start chiselling holes in it, bless him.

The direct-mounted (aka screwed to the body) JB humbucker pickup is the most conspicuous tweak on the new KC Mustang. The bridge is another.

In one of Kurt's favourite mods he famously switched the stock unit on his Mustangs (the '69 included) for a Gotoh tune-o-matic. Fender has used its own fiendishly renamed Adjusto-Matic version on the KC.

Kurt didn't care too much for the Mustang's Dynamic Vibrato unit either. Not many Mustang players do. He had his tech Earnie Bailey convert his Mustangs to hardtail spec by modifying the vibrato with a bunch of metal washers.

The reason is obvious as soon as you wobble the arm on the KC 'Stang. It won't stay in tune no matter how much you stretch the strings.

Where this Mustang does excel is in its tonal variety. The quirky on/off/on pickup slider switches serve up ice-pick sharp out-of-phase, sweet clean neck single-coil and spiky humbucker tones.

We love that the JB never strays into metal territory even on the highest gain settings. Anyone with a fondness for snotty garage punk riffs or trashy White Stripes or Black Keys style blues will love the tones on offer from the KC.

If you fancy a Mustang but don't feel Kurt's mods, take a look at the '65 reissue (£934) with its period-correct slab body, Dynamic Vibrato and single-coil pickups. Alternatively, the twin-humbucker Pawn Shop Series Mustang (£838) replaces the pesky 'Stang vibrato with a stable hardtail bridge.

But as great as those guitars are, we'd be most tempted by the tonally versatile and frankly great-looking KC Mustang. OK, the tuning stability blows if you use the vibrato. Solution: don't use it.

It's also bloody expensive, but shop around and you'll pay around £750. Problem solved.