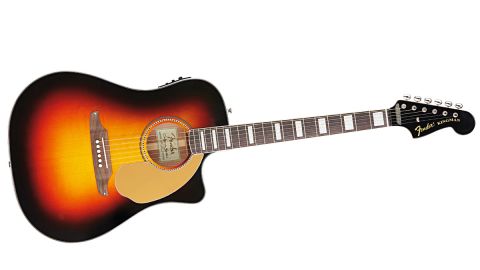 A tidy, well-priced job and a great looking electro.

There was a time when Fender's acoustic range was tarred with the brush of its unloved attempt to branch out in the 1960s. Today, however, Fender's affordable Asian-made range is one of the best selling acoustic brands in the world - worth another look, then?

The Kingman ASCE was released earlier this year, and not only recalls Fender's past acoustic dabblings in name - Kingman was first used in 1966 - and in that headstock and logo, but also the mid-to-late 60s-style block inlays and bound fingerboard on a maple neck. Unlike the original, it's not a bolt-on - thankfully! - but a more conventional build with a tidy acoustic-style heel.

Okay, cutaway dreadnoughts aren't exactly rare in this market, but along with all that Fender mojo we have a very tidily built box with a clean solid spruce top and nicely grained solid mahogany sides. The internal X-bracing is scalloped and there are internal side supports to prevent splitting. A bone nut and compensated saddle are nice details at this price, as is the Three-colour Sunburst gloss finish off-set by gold plastic-faced pickguard.

The Kingman's scale length is slightly below Fender's standard at 643mm (25.3 inches) but the chunky rounded profile, Gibson-like 305mm fingerboard radius, not to mention the bound edges and vintage-style small frets give the guitar quite an electric- like feel. This is reinforced by a relatively narrow nut width (42.7mm) and Fender-standard string-spacing at the 'Viking' bridge of 55mm. Put it this way, if you own a Fender electric, the Kingman is going to feel like home.

Powering comes from a Fishman under-saddle and side-mounted Presys preamp: an efficient well-proven system with accurate onboard tuner, three-band EQ and a phase switch, which not only gives you a subtle tonal shift at lower volumes but is also the first port of call to remove feedback on-stage. Our only niggle concerns the small black rotary knobs that lack contrast against the black fascia: not easy to see in low light.

Unplugged there's little to bother us. It's not the most characterful dread' we've had in our hands but it's lively, projects well with generous but not over-done lows and a rounded voice to the high string response that's rather appealing. Maybe it's just us but the whole vibe here suggests a strummer over a picker and certainly under a vocal, or for a rockier rhythm bed, the Kingman works really well.

Plugged in, again, it's a bit everyday and like so many electros at this price it needs an onboard mid-cut (and a fairly typical outboard lower mid-cut) to open out the sound. That relatively smooth high-end needs a little lift to add some sparkle but, if we're honest, that's all fairly typical.