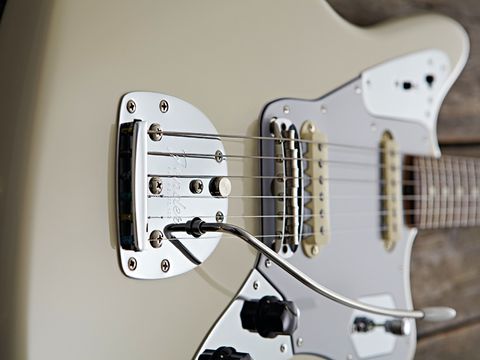 Finally, 50 years on, the evocative style and sound of the Jaguar is now available on an instrument that works. Nice one, Mr Marr.

Rarely have we come across a redesign of a classic instrument that is so thorough… yet still adheres so closely to the original!

Neck shape, body contouring, hardware, pickups and electronics have all been under the microscope of Marr and his design cohorts: UK repairman Bill Puplett, engineer John Moore and Tim Mills of Bare Knuckle Pickups. The body contouring is subtly different: the ribcage contour is longer but not quite as deep as the American Vintage or 50th Anniversary Jaguars; the forearm contour is slightly more rounded, and less angular than the other models.

If that's pretty marginal to the playing experience, the neck shape - inspired by Marr's favourite '65 model - is much more profound. In the hand it feels similar in the lower-fret positions but fuller as you move up the neck - 21mm at the first fret, 24.85mm at the 12th.

It also retains the original-style smaller vintage frets and the more curved fingerboard radius (like the American Vintage) making it feel even fuller than the dimensions suggest. These subtle changes have a huge effect: the neck feels more 'grown-up'.

The new bridge design swaps the threaded rod saddles of the Jaguar for the bigger, solid,
non-height adjustable Mustang saddles that sit flush on the bridge tray. The string spread of 56.5mm is wider than the 50th Anniversary - which is closer to 54.5m and, of course, you can alter this by moving the outer strings inwards and resting them in another adjacent thread.

The Mustang saddles just have a centre-placed string groove but this increased width means there's very little gap between the low E and the outer edge of the fingerboard the further up the neck you go. The bridge pivots in the same fashion, but nylon 'locks' prevent those needle-point screws from moving under tension - thus avoiding the decrease in string height that Marr had noticed and was confirmed by Puplett.

Another of Moore's engineering ideas was adding a nylon insert to the vibrato arm collar: the arm still push-fits but it feels smoother, more precise and more importantly absorbs any free play.

Marr has also ditched the dual rhythm/lead concept. This Jag has just one circuit: standard volume and tone controls and a four-position lever switch mounted on the smaller of the three chromed plates.

The top switch is the master filter (up engages the cut); the lower switch, mounted at a right angle, only works on position four where forward is on (ie it introduces the cut). Both these switches stick up less than the standard slide switches too, and are slightly more comfortable: typical of the thought and detail that has gone into this guitar.

To get into Jaguar world we started our test with a new American Vintage '62. Initially it seems weedy, bright and a little bass-light. But dialling in a clean Fender valve amp tone with reverb, generous bass and some mid-range scoop, we're transported back to the '60s, surf 'n' all.

The high-end attack from the bridge pickup will get you heard in the densest of mixes, the twin pickup mix is more three-dimensional with added weight and a really percussive, almost metallic attack.

The neck pickup, which sort of sounds like a Strat's middle pickup, retains plenty of high-end with a more fundamental depth - it's certainly bright enough as a 'lead' pickup for many of us. Switch to the rhythm circuit and even with both roller controls full up it's like you've engaged a 'muffle' switch.

If the American Vintage takes us very nicely back in time, then the Marr Jag just wants to make music and write songs. The combination of all the tweaks, especially that neck, gives a superbly functional platform - yes, you still have to think about those slide switches - but that aside the four-way switch is just so useable.

The bridge pickup sound combines brights with a certain sweetness that's far from ear-wearing; there's a hint of out-of-phase to the combined position, which in a good way adds character, a little Tele-like with it. The neck pickup again goes for musical sweetness and the darker humbucking linkage of the combined coils is mellow, fruity and surprisingly big sounding.

Add in some modulation, delay and reverbs and you can create some huge soundscapes and, with some funky distortion added from front-end boost, tougher, classic Jag wiriness is no problem either.

There's Fender-aplenty in the sounds but, as Marr says, Grestch and Rickenbacker spring to mind, especially with a little tone roll-off. Above all though, the clarity, and the musical sweetness of the tones allow for complex chord voicings for jazzier rhythms or simpler soul and funk styles.

The Johnny Marr Jaguar is a thorough redesign from the perspective of a very busy working guitarist. Aside from the low E being rather too close to the fingerboard edge in higher positions, it's faultlessly built for purpose, addresses five decades of 'Jaguar-ness' and puts a decidedly leftfield design squarely back in the mainstream.

Yup, it's not cheap, but bearing in mind the USA build, lengthy R&D time, mechanical improvements and the simply superb-sounding Bare Knuckle pickups, it's hardly unreasonable. If you're drawn to the looks and distinctive voice of the Jaguar but have never got on with its 'faults', here's the guitar you've been waiting for.