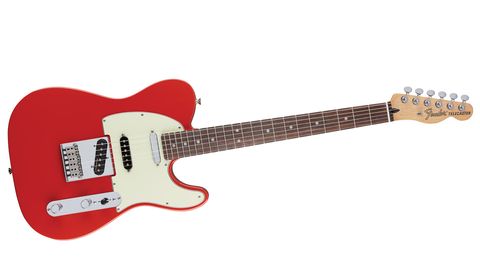 Tonally, this great little guitar wears many hats, not just a Stetson.

The Nashville Telecaster pays tribute to Leo Fender's first-born's dominance of the studio session scene in Music City, Tennessee, with a guitar that promises both classic Tele and Strat sounds.

Beyond the regular alder body and slim C profile bolt-on maple neck you'd expect to find when grappling with a Telecaster, you'll encounter some interesting upgrades.

The bridge and neck pickups are Tele items, while the middle single coil is a Strat model. All belong to Fender's Vintage Noiseless range and come wired to a master volume, master tone and a five-way pickup selector blade switch. More on all that stuff in a moment.

What's not so obvious is that Fender has pimped the Nashville Tele's playability with a 305mm (12-inch) fingerboard radius. To explain, Leo Fender spec'd the Tele with a 184mm (7.25-inch) radius. This works well for chords, but requires a medium to high action to bend strings above the 12th fret without choking out.

Most modern Teles feature a 241mm (9.5-inch) radius, which allows for buzz and choke-free bending. So, the bigger the number, the flatter the 'board, and the easier the action and string-bending. Our Nashville's whopping 12-inch radius is the same as a Les Paul. The result is a low action that doesn't grumble when you dig in anywhere.

Before we plug in, we should point out some other details, including 22 medium tall frets, a contoured neck heel for easy top end access, solid block bridge saddles for great sustain, and a set of rock solid locking tuners. If you prefer the snappier tone of a maple 'board, that's available, too, but the finish options are different.

Single-coil pickups can generate a lot of unwanted noise, otherwise known as 60-cycle hum. That's not a huge concern on stage or in rehearsals, but it can cause problems in the studio. The Vintage Noiseless pups live up to their name by cutting out the hum without sacrificing the classic single-coil tones.

The bridge has bags of Tele twang on clean and roars when distorted - like a mash-up of Johnny Cash and early Jimmy Page. The neck position has a warmth and depth that's uncannily like a big hollow jazz guitar, while the middle Strat pickup works great for crunchy rhythm work - but it's the two 'in-between' Jimi Hendrix/Stevie Ray Vaughan sounds that'll get the juices flowing. This Tele will nail Little Wingwith more bottom-end grunt than any Stratocaster.

The message is clear. Regardless of its geographically specific name, don't be tempted to typecast the Nashville Tele as exclusively for the country set.