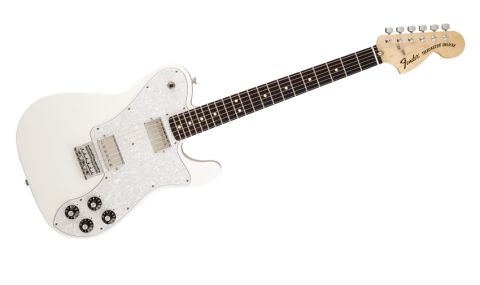 Like the best signature models, Shiflett's Tele is mindful of the artist's foibles - in Shiflett's case, a fondness for country and punk - while boasting a real-world practicality that anyone can dig, at a price that's within reach for many.

It's about time that Foo Fighters guitarist Chris Shiflett's name was sharing a Telecaster's headstock space with Leo Fender's.

After all, Shiflett is 100 per cent box office. His day job with the Foo Fighters sees him play to sold-out stadiums and film music videos in aircraft hangers; and until now he has been alternating between a '72 Telecaster Deluxe and a homebrew T-style electric, beefed up to give him extra grunt for the Foos' gutsy tone. He deserved this guitar - and it's well worth the wait.

It's immensely playable - worryingly addictive, in fact. Where it differs from Shiflett's Teles of yore is that the maple fingerboard is gone in favour of a 305mm (12-inch) radius rosewood 'board with medium-jumbo frets, which makes this guitar as much fun for playing aggressive rock as rockabilly, chicken pickin' or slow-hand blues. The neck has a relatively high-gloss urethane finish, but heavy sweaters shouldn't worry - it doesn't gum up too badly.

The reason Shiflett built his own guitar in the first place was to have hotter humbuckers, and this is where the custom-wound CS1 and CS2 pickups come in. As promised, they're sizzling hot, and render big rock riffs and lead squeals with suitable power and definition.

But crucially, they don't shout down the voice and personality of the Telecaster; there is still that signature bite and twang to be had. This Tele Deluxe has Chris Shiflett's name on the back, but it can belong to anyone's playing. Okay, maybe not super-brutal metal, but Shiflett's axe has such a wide tonal range that it begs you to find your own sound, and that's arguably the most important thing you could ask from any guitar.

At first, it's hard to believe that Shiflett's Tele is an off-the-shelf Mexican-built instrument when it has a lot of the feel of a heritage instrument. We can spot some minor finish imperfections where the neck bolts onto the body, but when you consider what you're getting for less than 700 quid, we reckon these are flaws we can all live with.