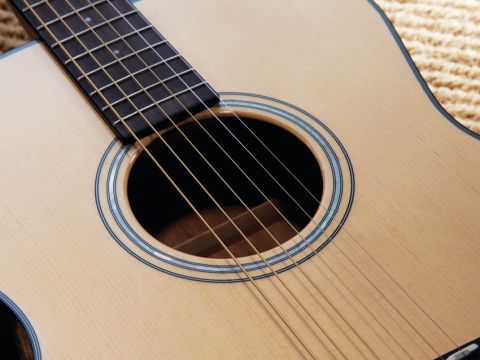 The CF-140S does Leo proud with its tight handling and punchy voice.

What the folk is going on here? In a market sector that groans beneath a glut of bloaters and behemoths, the Fender CF-140S is slim, sultry and almost a little stunted, like Kylie Minogue driving a Smart Car.

In terms of cubic centimetres of fresh air, it's virtually a shoebox with a 104mm rim depth to the laminated mahogany body, a solid spruce top circa 370 mm at the widest point, and a corset-waisted hourglass figure that we desperately want on our lap. The laws of physics dictate that smaller acoustics often don't have much poke, but the Fender boys are confident, citing "full, rich and resonant" projection that will "fill a room".

"The tone is damn good for the price, with a great spruce snap that gives definition with fingers and a rousing jangle with a pick."

Inside and out, the X-braced Chinese build is tidy and there's nothing to delay you getting to grips with a body and neck that are a breeze compared to your average dread. The body doesn't swamp you, the neck feels slim in the palm and the scale is just a little shorter.

String spacing is pretty standard, meaning you have plenty of room for uncluttered fingerpicking combined with a great sense of physical control. Fret access is no better than normal, but all in all this feels like the kind of go-anywhere guitar that you grab for a busking session (an impression backed up by the price).

The CF-140S certainly has a bit of welly for its size, but compared to the big boys it doesn't ring out with as much authority and, relatively speaking, we found ourselves working hard once we opened our gob to sing. The tone is damn good for £178, with a great spruce snap that gives definition with fingers and a rousing jangle with a pick.

As for that "fill a room" soundbite… we're not so sure. It's certainly punchy and insistent, but the tone leans towards the twang and falls down a little on warmth and fullness.

The folk-size body has seen a resurgence in popularity over the past couple of years, finding favour with the bearded fraternity, Scoring a Fender acoustic for less than £200 is an exciting prospect, and the CF-140S is a real breath of fresh air.