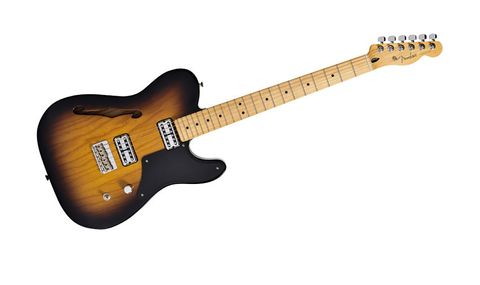 Anyone who enjoys arpeggiated picking and a crunchy valve tone is in for a treat here - both for the eyes and the ears.

Back in 2009, Fender's Custom Shop revealed the La Cabronita Especial, a stripped-back Tele with Gretsch-esque TV Jones pickups. It was complemented by a relic'd nitrocellulose paint job and modern six-saddle hardtail bridge - plus a depressingly high price tag.

So, rather than fork out for the real (expensive) thing, enthusiastic guitarists simply bought the individual parts and made their own Cabronitas, then proceeded to share their creations with the world via the interwebs.

Understandably, Fender soon twigged that they were on to something, and released a Cabronita Telecaster as part of 2011's Telebration series. It was cheaper, but not by much - the SRP was still £1,810. It took until 2012 for Fender to announce a made-in-Mexico Classic Player version of this much-revered guitar, with Fideli'Tron humbuckers and a high-gloss poly finish cutting the price down to a cool £646 - now we're talking.

So, what's new? Well, the big F has been busy tinkering with its Latin lovechild - and the new Cabronita Telecaster Thinline boasts a semi-hollow construction for an alternative take on the fiery axe. It still boasts a pair of Fideli'Tron humbuckers, a hardtail bridge plus maple neck and fingerboard, but is it the Cabronita for you?

Adding body cavities to the traditional Telecaster template was first intended as a way of reducing the weight of the guitar, but the resultant tonal changes have seen this holey guitar take on a life of its own. The same goes for the Cabronita Telecaster Thinline, which boasts the same specs as its Cabronita brother, but with that all-important f-hole tonally redefining the instrument.

The Thinline is, of course, lighter than its heavier-set solid-body compadre, but it still carries a heavyweight set of tones, albeit with more subtlety to the clean sounds.

The middle position is particularly, ahem, hollow, with a mellower tone that's perfectly suited to on-the-edge-of-break-up extended chords, while the neck and bridge positions are a touch thinner and sweeter than its solid brother.

Adding dirt definitely changes the story, though - these are still spanky, incisive tones, but they're not quite as well defined. All in all, that makes the Thinline less of a riff monster, and more of a clean machine.

Still, you could argue that fretboard acrobatics and pinch harmonics are not what this guitar is for. Anyone who enjoys arpeggiated picking and a crunchy valve tone is in for a treat here - both for the eyes and the ears - and the Thinline is another exciting development of the Cabronita line. We can't wait to see what Fender comes up with next...