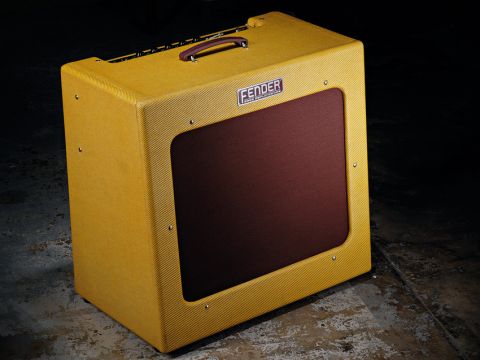 Eminently practical, yet classically sexy. We bassists may like innovation and progress, but this is true retro love.

While guitar players are bombarded with reissued classic amps, we humble bassists are seldom offered such vintage-inspired choices. Our interest was piqued, then, at the news that Fender is revisiting one of the most famous amp models in history: the Bassman.

Designed originally for bass in the early 1950s, it was then hijacked by guitarists later in the decade and, in 1959 narrow-panel guise, has been dubbed by some luminaries as the best electric guitar amp of all time.

Here the TV-style front, lacquered tweed covering and cloth grille are pure nostalgia, but by employing a valve preamp and solid-state power section - upping power by around 300 watts over the original - it now has the clout it needs for modern players.

The control complement is also given a modern twist reflecting that bass amp technology has come a long, long way since the '50s. The bright chrome panel supports a single channel with a second input offering optimum connection for active basses.

It's simplicity itself with an input gain control, master volume and three rotary tone controls, enhanced with deep and bright switches for expanded tonal range. With a dog bone handle, chicken head-style control knobs, removable casters to help in transportation and a powerful output, this is definitely built for jobbing bassists - this lacquered tweed is a great deal hardier than you might think.

Gone is the old open-backed design, replaced by a ported rear panel that allows every bit of the bass sound to come into play. Practical additions include a balanced XLR DI out on the back panel and even a mini-sized cooling fan. A slavish reissue this ain't!

Fender bass combos have always had a purity of tone that's both clean and dynamic, making them ideal in the studio. The bigger models in the early days were extremely good at projecting the sound, although their power rating was soon overawed by the sheer force of an overdriven guitar combo. But not any more.

This Bassman TV Series may feign a pleasingly ancient personality, but the upgraded power rating cuts it with the big boys. Much of the signature sound and purity remains, however. It's the less-than-perfect nature of the humble valve that gives enhanced depth to any selected tone, providing the fatter and indeed warmer elements that bass players seek.

The solid-state power stage anchors it all well, offering up a classic-voiced tone that'll fit roots, blues and rock tones, reproducing the solid foundation and percussive click of a good Precision Bass, for example, with aplomb.

There's a very reliable, robust delivery throughout the tonal range, with the true Fender bass amp sounds achieved by using just the three tonal rotary controls, so it's lush and warm even at lower volume. With the sensible addition of the bass and top boost switches you can open out the sounds, giving it a more modern edge and greater versatility. The results are huge and dynamic - it certainly lives up to the legendary name.

While the two smaller models in the range are attractive options, it's the Bassman TV Duo Ten and TV Fifteen that are the full-on gigging combos. With a pair of 10-inch speakers the Duo Ten is the most expensive in the range and favours the funkier, modern styles of playing.

For sheer all-round rock versatility, though, this 1 x 15 TV Fifteen is a mighty good friend to own. No external speaker out is surprising, as this powerful beast would feed the extra spread without difficulty. Other than that, this retro-modern belter holds bags of new-old appeal.