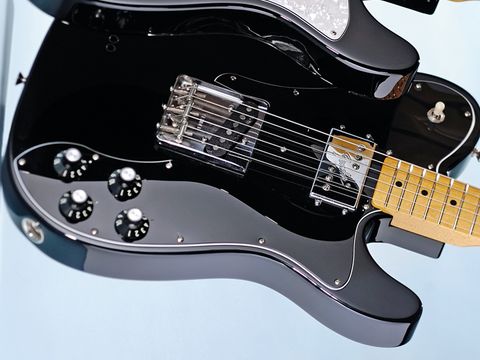 The best-yet production versions of a now-classic Tele, with excellent vintage detail and sounds.

Fender's American Vintage series is the closest you can get to a vintage Fender guitar without buying the real thing from yesteryear or moving into the more elite Custom Shop.

This new addition - along with the '69 Thinline and '72 Thinline - is already available in lower-cost Fender ranges, but not at this quality or with this much vintage detail.

"One reason why the Telecaster has survived all these years is that it's graced pretty much every genre from country, jazz and blues through to modern mainstream rock and metal."

The '72 Telecaster Custom was first introduced in 1972; a solidbody that marries a Fender humbucker at neck with a Tele single-coil at bridge and, importantly, a Gibson-like volume and tone control for each pickup.

If the '72 Thinline was, on paper, a little too Gibson, the '72 Custom perhaps reflects more of a player-conceived middle ground.

Certainly many players had already started modding their Teles - adding a Gibson PAF in neck position was one of the most common alterations, but the difference in outputs could be substantial, and with just the Tele's single volume and tone set-up there was little you could do.

Enter the four-control Gibson-style layout, complete here with Les Paul-like shoulder mounted toggle switch. It's gloriously '70s, too, with those amp-style control knobs, an even bigger scratchplate and even an additional string tree for the G and D strings.

The major difference is, of course, the solid ash body; with the exception of that additional string tree the neck is identical to the '72 Thinline.

One reason why the Telecaster has survived all these years is that it's graced pretty much every genre from country, jazz and blues through to modern mainstream rock and metal.

It's not always an easy ride: some swear by the bridge pickup (and swear at the neck pickup), others find an endless soul and funk groove from that middle, hollowed mix. There are even a few of us that actually like the neck single-coil for its smooth, jazz-edged voice.

The Custom combines the spike from that Tele bridge pickup with the width and smoothness of the neck humbucker - and it's all a little firmer and more solid-sounding than either of the Thinlines.

But it's the pickup mix that's the real draw here - it's like two guitars playing in perfect sync. It's not a particularly Strat-like, or indeed a wider Tele-like, hollowed mix at all.

Instead there's that beautiful high-end single-coil break up, yet with a low output humbucking warmth underneath that sounds really big; it's a tremendous roots rock rhythm tone, really three dimensional, while re-tuning to open G gives you instant Keef.

Used individually the pickups are quite well balanced, but the tonal spread is almost too wide. We can't stress enough just how good that mix sounds though… from Motown rhythm, to '60s power-pop, alt-country, and even quite higher-gained classic rock, it does it all - just use those volume and tone controls to match your tonal aim.

Then, of course, you have two wildly different lead tones, both referenced in the past, to switch too.

But the more we play this it's the classic old-style tonality, especially of the more unusual low-output humbucker-equipped guitars, that impresses.

We also love the bridge pickup of the '72 Custom: it's nasty, edgy and very rock 'n' roll for some hugely attacking rhythm tones or wiry leads and, back into the clean Fender amp, still does a pretty good jazz sound on that neck pickup or the appealing mix.

This guitar was originally conceived at a time when Fender began to lose its way. However, 40 years on the guitar has been elevated into Fender's top drawer thanks to numerous often left-field players who wanted a piece of 'vintage' Fender but simply couldn't afford the high-value classics.

Although this guitar has been available for some time in both Mexican- and Japanese-made guises, this American Vintage improves on both those and the original with its lightweight build and lacquer finishes. Features such as the three-bolt neck joints and bullet truss rod adjusters (when done properly) make a lot of sense, too.

The small frets and fingerboard radius, not to mention the lack of a rosewood 'board option on the Custom, or the paltry colour choice, won't endear them to all, but with street prices already around £1.5k these updated blasts from the past remain a powerful draw.