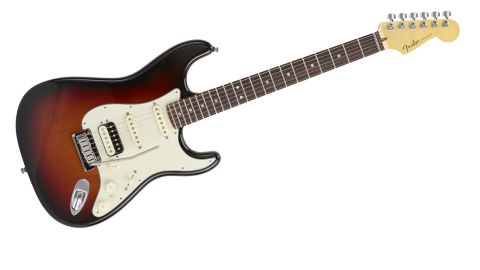 A versatile Strat that's subtly tuned for the modern rocker.

Fender's American Deluxe range sits on a high branch of the tree when it comes to USA production instruments outside of the Custom Shop, and while the cosmetics are classic, there's an emphasis on pro-spec features that offer contemporary guitarists the kind of smooth ride that smaller boutique builders are famed for.

Compound or conical radius fingerboards are nothing new, of course - violin makers have been doing it for centuries - but for many guitarists it's still rather more novel.

In practice, the 241mm (9.5-inch) to 356mm (14-inch) 'board here means that chordal work feels comfortable at the lower end, but there's no choking when you bend up at the top, and indeed a lower action is possible overall. If you haven't tried a guitar with a compound radius fretboard, you really should.

The push-push Passing Lane switch situated between the instrument's tone controls is similar to the John Suhr 'blower switch' or the 'straight out' function on the 2015 Les Paul Standard in that it routes the bridge pickup signal to the output jack, bypassing the pickup selector, volume and tone circuitry - although it's much easier to engage on the fly here than pulling up the bridge pickup's tone pot on an LP. What you get is an instant jump in volume and bite - but more on that later.

The neck and middle pickups are Fender's noiseless N3 units, which appeared on the American Deluxe Stratocaster in 2010 (reviewed in issue 335), while the bridge humbucker is the Shawbucker that appears in the model name.

Tim Shaw was the engineer at Gibson in the early 1980s who was tasked with replicating the PAF for its sought-after Heritage 80 Les Pauls, and his forensic analysis of 1950s humbuckers yielded a pickup with a big voice that now commands serious money on the second-hand market.

Shaw has been working behind the scenes at Fender, and designed the Shawbucker that carries his name here, which appears along with a clever volume pot that operates at either 500k or 250k to suit the pickup selection.

The Shawbucker in our guitar is a pre-production unit - Fender says the instruments will ship with a pickup that's a little brighter and spankier.

The Deluxe HSS Shawbucker is several orders of magnitude more versatile than that. Although its Noiseless N3 pickups aren't quite as alive, dynamic and spanky as others - perhaps because the stacked coils are by definition cancelling some of the whole picture you get with a great set of true single coils - as you wind up the gain and volume, the noise-cancelling benefits are palpable.

That's especially true if you record in close proximity to a computer monitor. Though Fender says our guitar's Shawbucker isn't quite right, it certainly sounds good to our ears, and the Passing Lane switch kicks the door down and brings more than enough ammo for hot-rod lead merchants.

The Deluxe HSS Shawbucker is another example of Fender's ongoing attempts to reclaim the 'Superstrat' and beat off competition from the Suhrs and Tom Andersons of this world. If you're a jobbing session musician or pragmatic modern rocker, then it comes highly recommended.