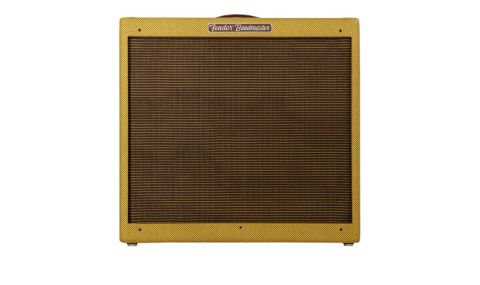 Twin, Deluxe, Bassman: all game-changing tweed Fender combos that remain at the heart of modern guitar amp DNA. Behind those superstars of the 1950s, however, were a cast of less famous models including the quirky 3x10 Bandmaster.

The amp's biggest claim to fame is that - coupled with Pete Townshend and a Gretsch 6120 - it made a glorious noise on Who's Next in 1971. You might say that even by then it was anachronistic, and in the ensuing years has fallen further into the shadow of the Deluxe and Bassman. It sits perfectly between them, however, so with pub/club gigs getting quieter and the quest for vintage tone as strong as ever, now could just be the perfect time for the tweed Bandmaster to return. Et voila...

Fender is keen to point out that this new amp is not a slavish reissue, not least because there is no definitive original. Instead, the design team assembled a handful of genuine vintage Bandmasters, and found themselves inclined towards the ones with higher headroom characteristics and slightly less compression.

In addition, there have also been some component value changes to give the new amp a slightly stronger bass response. Fender believes these choices make the new amp more relevant to today's players and styles.

The cabinet is vintage-correct, finger-jointed pine (pine sounds quite different from ply and is lighter too) and the circuit is hand wired on a vintage-style tag board, befitting its Custom Series status. As a result it sits above the regular Reissue line in terms of price and spec: a boutique amp for all intents and purposes.

Why 'only' 26 watts from a pair of 6L6 output valves? Well, the Bandmaster's relatively low- power output transformer keeps things in check to better protect the low-power speakers. When you add in the valve rectifier and turn it up, those 26 watts convert into something the amp wasn't designed for, yet has become the reason people love them today. We're talking gloriously rich, sizzling, vintage overdrive with ladlefuls of dynamic sag and natural compression... At volumes you can use.

Don't expect shimmery, 'blackface' Twin-type cleans or tweed Bassman-like headroom. Instead, armed with a Gretsch Center-Block White Falcon, and with the amp volume down around three or four, you're greeted with a gigantic 3D soundscape that has even non- guitar players impressed. It's thick yet bright, with a noticeable 'hair' to the top end that breaks off into light vintage overdrive.

Wind up the wick and the oh-mama moments come thick and fast with any classic guitar. It's an immensely authentic, evocative, grin-inducing experience, quick into overdrive with a palpably more furry-yet-ebullient edge than, say, a '65 Deluxe or Twin Reverb.

Push the volume and the sag and compression is more noticeable in the bass end, particularly on the attack of lower notes. Pick lighter and the twang returns; it's an extremely responsive amp in that respect, so suits players who like to eke out a full range of textures and dynamics.

The presence control on many early tweed amps gave players more brightness and brilliance, which it continues to do here. What it's actually doing is decreasing the amount of negative feedback in the power section as you turn it up. The result is a slightly more 'wild' sound with increased distortion on the treble frequencies particularly. You might love it, or you might prefer it dialled back for more control and 'order' in the sound.

Yes, you can do the Pete Townshend thing, but also think about Mike Campbell, John Fogerty, Springsteen and Neil Young. It's perhaps too furry for trad country, but right at home in any modern Americana setting.

Everyone who plugged this in during its time at Guitarist was grinning within seconds. It's the antithesis of the modern, multi-featured box, offering up a pure, undiluted vintage tweed experience at a volume level that's bang-on for modern pubs and clubs.

It's louder than a tweed Deluxe, less visceral than a Bassman and nowhere near as versatile as a Hot Rod DeVille. Yet what ought to be an outdated piece of history paradoxically still sits supremely well in many vintage and contemporary musical styles.

It's not very sensible, it's not particularly good value, but it is - unfortunately - completely magic.