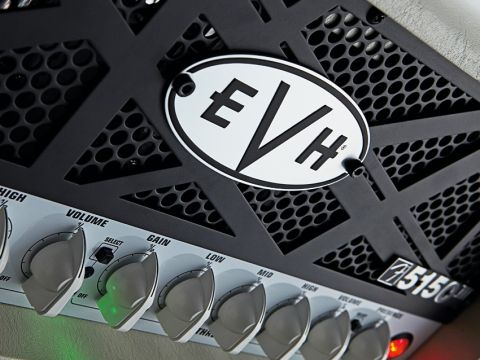 The most attractive EVH amp rig so far? It's certainly not far off and, the odd concern aside, it's well worth trying out.

As Van Halen gear up for a huge US tour this year, it's fitting that we take a look at the latest version of the main man's signature amp.

We've described the genesis of Ed's legendary 'brown' sound on many occasions over the years, so it's a little ironic that this new EVH unashamedly sports a Fender 'F' logo as part of its livery. While Ed has always been a Fender fan, and the 1967 Marshall SLP Ed used to redefine rock guitar tone had Fender Bassman in its DNA, the latter's 6L6 power stage isn't necessarily one you'd expect to provide Van Halen's heavily saturated gain tone…

"The amp's style is all Edward Van Halen - from the faux-striped grille and EVH badge to the internal specification."

Tom Wheeler's excellently exhaustive The Soul Of Tone book features a revealing quote from Ed himself, as told to Guitar Player magazine in 1980. "When I'm at home I use a little old Fender Bandmaster. You get a tube distortion and it sounds really good. I'll tell you, the best sound I ever get is sitting at home playing through that little Bandmaster cranked on 10."

'60s Bandmasters were rated at 40 watts and the output is one of the headlines with this new EVH III, as it's rated at just 55 watts. What's more, it bears a striking resemblance to not only the Bandmaster but also other Fender Piggyback amp and cab arrays such as the Showman and Bassman.

We've reviewed the amp in tandem with the equally shiny and new 2 x 12 EVH cabinet and, brilliantly in our opinion, the design features a practical method of locking the amp to the top of the cabinet in order for it to be leant backwards, supported by vintage-style tilt-back legs.

This feature first appeared on Showman rigs from 1960 and we love the fact that such an old school feature has been included on what is otherwise a thoroughly modern amplifier. Hook the two metal flanges sited on the bottom of the amp over two thumbscrews fitted to the top of the cab, tighten and away you go.

That aside, the remainder of the amp's style is all Edward Van Halen - from the faux-striped grille and EVH badge to the internal specification. It still offers a super-hot preamp section, here powered by a sextet of 12AX7 Slovakian JJ valves, but the reduced output needs just two 6L6s.

Another major change in spec is that although the amp still offers three channels, clean channel one and the hotter channel two share gain, volume and EQ controls. The incendiary third channel is controlled by its own pots, and there are master presence and resonance knobs too; still no master volume, however. A four-button footswitch is supplied and additional features include a MIDI port, mono effects loop and, of all things, a headphone socket.

The 2 x 12 cab, which is in effect an EVH 412 sawn horizontally in half, is loaded with two Celestion Heritage 30s. It's worth mentioning that a 1 x 12 cab is also available, albeit without the tilt-back array and, as a package, the rig looks wonderful: simply check out Ed's backline in the video that accompanies VH's new single, Tattoo, for proof.

The concept of leaning an amp backwards as described is to aid the projection of sound for the player and, when stood in front of the rig, we're sure you'll have no problems whatsoever hearing yourself.

With channels one and two now sharing EQ and gain pots, we found it nigh on impossible to obtain a clean tone with sufficient headroom and sparkle without compromising the sound and feel of the classic VH rhythm tone that channel two does possess. In fact, even adding in the MXR '78 Custom Badass distortion as an additional overdrive pedal doesn't satisfy us.

This is a real shame because both the clean and crunch performance on their own are excellent. Peavey's 5150-II amplifier offered a footswitchable crunch button on its cleaner channel, and maybe that would have been a better option here.

Ed's more modern tone is easily recreated via channel two, and we used both an EVH Wolfgang Custom and a Les Paul Standard in our hugely enjoyable sound tests. Using a guitar loaded with higher-output pickups, the Peavey PXD Void, did add a little too much harshness at times, but reducing the amp again and upping the output helped smooth things off.

If channel two is 'brown', then channel three - easily the dirtiest of all - is pure black and, again, we're not surprised that an increasing number of metal bands, such as Trivium, are using the 5150 in their backlines. The ferocious gain is a familiar feature here, but the 50-watt output really enables you to crank the amp up and enjoy the benefits of a cooking valve power stage without necessarily causing damage to your hearing.

To our ears, the 2 x 12 cab is a little green and therefore overly toppy at higher gains, but employing both the master presence pot to rein the EQ in and the resonance control to increase the feel of the low end helps enormously.

We also tried the head out with the 1 x 12 cabinet and, although we'd have no complaints bearing in mind the smaller cubic volume and single Celestion configuration, the tone is undeniably smaller and less impactful. Most vitally, it also doesn't lean back.

The mix of 50-year-old Fender design ideals with a thoroughly modern spec and performance is a refreshing one and, with Van Halen gearing up for what is likely to be a very busy year, this 'cute' new version of the 5150 will surely be one many players will be anxious to try out.

With earlier incarnations of the 5150 head rated at a whopping 120 watts, and the current Mexican-made 5150-III pumping out 100, introducing this 50 seems like a no-brainer.

It's a pity the combination of channels one and two into one set of pots prevents you from having both a pristine clean and a 'brown' rock rhythm tone, but channel three remains as gloriously dirty and suitable for metal as ever.

This head and 2 x 12 cabinet cost less than the 100-watt EVH-III head alone. That, along with the manageable output and compact size of the entire rig makes this arguably the most attractive EVH amp package so far.

Rock guitarists who hanker after Ed's tone, but need a versatile all-round amp into the bargain, should seek it out right away.