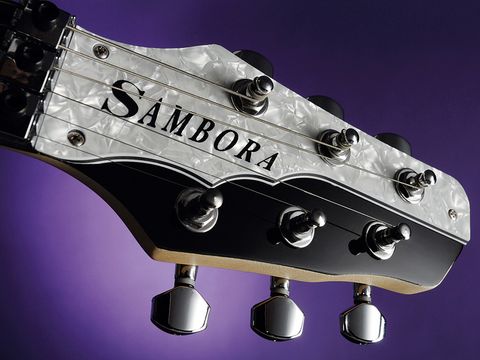 An affordable guitar bearing the name of one of the world's most successful players. Its sleek look and feel should allow it to overcome any perceived tonal shortcomings.

Over the years, Bon Jovi guitarist Richie Sambora has been associated with plenty of brands, but this new model from ESP bears little resemblance to any guitar that's previously passed through the man's hands. The guitar is the brainchild of Sambora and his long-time guitar tech Chris Hofschneider, who's been with the guitarist for 22 years on and off.

"Richie and I started to collaborate when I was running the Kramer Custom Shop," explains Chris, "during which time we developed the Kramer Richie Sambora model. Later, after Kramer's demise, we did the Fender Sambora Signature Strat, with the heel access behind the bottom horn cutaway.

"During breaks from touring, I've always continued to build custom guitars. I'd been thinking of a guitar that would meet players' requirements. A guitar that had sleek looks, played comfortably in both standing or sitting positions and, of course, had the tone."

As result of this, the pair formed a company, Times Square Guitars, whose circular decal can be seen on the rear of the body, just behind the three-way toggle.

"The R&D was addressed and we took prototypes on tour," continues Chris. "Then Floyd Rose, JT Riboloff and Andy Papiccio came out to visit in Seattle. Now, as Floyd is an old friend of mine and Richie's, we made just a few prototypes with his new Speedloader trem. We held onto these guitars, as people will have seen on videos, on TV and on stage."

JT Riboloff made his name in the Gibson Custom Shop and R&D division, and has built guitars for many of the world's best-known players, while Andy Papiccio is another long-time associate of Hofschneider's from the earliest Kramer days.

So why ESP? "We wanted a guitar of quality, with sleek looks and voice, at an affordable price for students as well as players. One that didn't hinder playability like the guitars most of us cut our first chops on," states Chris. "I'd had a friendship with ESP's Matt (Masciandaro) and Jose (Ferro) since I was young, so it made total sense. ESP have and always will have, a great reputation; it was natural."

So how much does the spec of the SA-2 differ from Richie's own versions of the guitar? "Richie still owns the prototypes - two black and white guitars, one of which is fitted with the Speedloader. [For the SA-2] we decided to go back to the original Floyd trem although, for the record, we were additionally planning to use single-coil pickups to go along with Speedloader.

"However, we never put the single-coils into production and ultimately decided that we only wanted the production SA-2 in black. And it stays that way, with ESP as the only source of distribution."

Although the look of the SA-2 is slightly removed from what players might expect an out and out rock guitar to be, the spec and feel is just what's required. The body, which offers a small yet perfectly accessible top cutaway and a lower cut that benefits from additional shaping, is fashioned from basswood and is complemented by a slinky, two-piece maple neck.

We had the opportunity to get to grips with Sambora's number one, Hofschneider-built original during Bon Jovi's last UK tour and the neck here is marginally flatter in feel, although both demonstrate a shallow U-profile.

The 22 nicely flat, extra-jumbo frets and low action again tick all the right rock boxes, and although the rosewood could have done with a dab of lemon oil, the SA-2 has a good feel out of the box. The neck is fixed to the body with a slightly offset four-screw join, and the headstock bears the man's name on a bespoke piece of three-ply pearloid scratchplate material.

The age-old argument regarding the benefits of in-house rather than retrofit pickup brands is raised yet again by the provision of a pair of ESP LH-100 humbuckers. We'll assess how they perform in due course but we can't help feeling that the overall commercial appeal of the SA-2 would have been further enhanced if it boasted a set of matched Seymour Duncan PAF-style 'buckers.

Here are clips of the SA-2 in action, starting with the bridge pickup, then the twin pickup mix, and finally the neck unit:

In a live setting Sambora uses a huge amount of gain, and the first thing you notice when using a similar sound through a tube amp is the zingy nature of the basswood. You'll need to make use of the tone controls to corral that trebly side, but for classic rock rhythms, the tone is just about there.

Proceedings tend to become less distinct as more gain is added, compressing the overall tone and leaving you with a wall of sound, rather than one that obviously comprises six strings. This certainly doesn't detract from its rock performance, but a full E chord complemented by an upstroke on the open high E and B strings doesn't have the effect you might hope for.

Bluesier styles seem best served by the middle position on the toggle, with the outputs from both pickups combining nicely, although clean, the guitar is rather flat and difficult to please. It certainly plays well, offering just the right amount of fight, and once set-up the Floyd works as efficiently as it always has.

This is a rather unusual addition to ESP's signature range and, more importantly, is priced well enough to put it within reach of almost anyone. Sure, in the long run, the overall performance could definitely benefit from some retrofit pickups, but there isn't much intrinsically wrong with the standard LH-100 humbuckers, aside from a rather staid clean workout.

The guitar can rock very easily, and offers everything a rock player would need, alongside a look that sets it slightly apart from the maddening crowd.