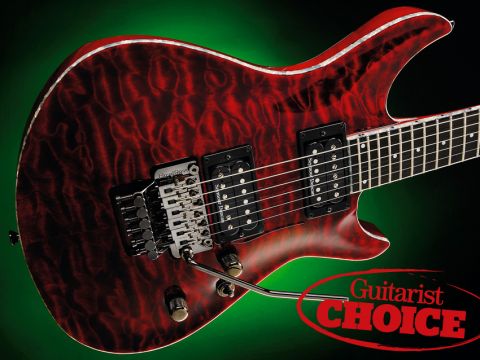 This is an exceedingly versatile and high quality instrument that any serious player should try.

Electric Sound Products (aka ESP) began life as a producer of quality guitar parts in Tokyo in 1975, before turning part of its focus to the production of custom instruments of the highest quality. The Formula range includes four guitars of varying spec and is included in ESP's Standard Series, all made in Japan and intended to mirror the values of ESP's lauded Custom shop.

Before we look at the guitar, ESP Japan President Makoto Suzuki was gracious enough to give us some background on ESP's beginnings.

"At that time there were many guitar brands," says Mr Suzuki, of ESP's early days. "But most of them were involved with mass-production and it was hard to find a guitar that satisfied each musician's particular taste.

"Mr Shibuya, the founder of ESP, and a few craftsmen decided to build custom guitars one by one for these musicians to meet their requirements. They never compromised on quality and, after a few years, musicians and the Japanese market associated the ESP name with the finest custom guitars."

"Thanks to the through-neck, there's no clumpy heel, allowing easy access to the top frets"

The FR-II is arguably fanciest of the four guitars included within the range and our example sports a stunning quilted maple cap that's bound with lines of pearloid that extend all the way up the neck and around the headstock.

"We had been looking for something new that could be a new addition to our Standard series next to our major lines such as Eclipse and Horizon," says Suzuki. "I made hundreds of drawings and finally came to this new model. I think the Formula will prove popular as the next Standard - it's so versatile and suited to many different styles."

One departure is the guitar's through-neck construction. The neck, which comprises three pieces of maple that run uninterrupted from the rear strap pin to the tip of the headstock, is flanked by 'wings' of solid mahogany to make up the body.

The headstock itself is an off-set three-plus-three configuration, similar to that utilised on the Standard FX model, rather than the more familiar and pointed six-in-a-line style. The fingerboard is high-grade ebony that's been worked to a mirror finish, as have the two dozen XJ frets.

Thanks to the through-neck, there's no clumpy heel where the neck joins the body, allowing easy access to the top frets. We have to say that this is one of the nicest necks on a rock guitar we've experienced in quite some time: it's smooth and wide, yet eminently comfortable to get to grips with.

"We think that the most important part we must stick to is a guitar's playability," agrees Suzuki. "Anybody could use finest woods, but you can't get the best playability without the trained techniques and deep knowledge our experience gives us."

This version features an original Floyd Rose vibrato that includes a 41.5mm locking nut that sits within a 43mm-wide slot. The reason for this discrepancy is an intentional ploy by ESP to allow increased space between the outer strings and the fingerboard edges to ensure they don't slip off the 'board during conventional playing techniques.

Versions with a tune-o-matic style bridge and through-body stringing are also available (see spec check for pricing details), as are models loaded with an EMG 81/60 set. But here pickups comprise a Seymour Duncan TB-4 JB Trembucker in the bridge and a neck SH-1n '59, the versatility of which will benefit from the inclusion of a push/push volume pot that splits both pickups.

The build quality that the guitar demonstrates is very special and there's nothing we can suggest to improve it. What's more if a trans black cherry finish isn't your cup of tea, there are a further two finish choices to consider.

The two pickups sit directly above the maple of the through-neck, which does give the guitar its own voice and, with a smooth rock overdrive, the inherent trebly edge gives rhythmic chords an increased level of sonic cut. As you'd expect, the mahogany does smooth the tone off to a degree, but the neck humbucker is strident and full, rather than providing too mushy a tone.

The coil-split gives the bridge pickup a skinny, almost brittle tone that's great for funk, but little else. Blues fans will enjoy the split middle position on the three-way toggle, which allows that brittle bridge voice to be nicely warmed - a touch of compression helps smooth the crystalline nature still further.

Flick to the split neck pickup and the sound is much more useful for all manner of clean applications, from Metallica's Black Album modulation, to big pop-flavoured chords.

There's plenty of body on offer, albeit subtly influenced by the underlying zing. The best news is that rock players and shredders in particular will revel in a neck that's truly a work of art. Its construction gives a stability that allows for a super-low action, while speedy runs and death-defying half-chord passages are made extremely easy to pull off, despite any limits in your technique.

The Floyd is perfectly set-up too and, with the black nickel hardware and gorgeous finish, the guitar looks pretty special.

By their very nature, members of ESP's Standard Series are expensive and, at first glance, we considered the Formula's asking price to be pushing the upper limits of what we'd expect to pay. But quality and experience always costs.

"We are proud of our long experience and the knowledge we've learned," says Suzuki, "and we know that maintaining a high quality level is the only way to retain our customer's trust. There are hundreds of factors to make a guitar of the finest quality; we know them all and put all of them into each guitar."

What's certain is that the 'Made In Japan' sticker is now an uncontested mark of quality in the guitar world and the Formula can effortlessly hold its own with the vast majority of guitars from the USA or, indeed, the UK at similar price-point. We've played more than our fair share of Japanese ESP guitars to know that the quality is both of an exceedingly high and consistent standard.

But the Formula remains highly versatile tonally, while the feel of the neck is very impressive indeed. After spending a few weeks in its company, we're totally convinced and any initial misgivings have been blown out of the water. Try one at your local dealer and see how you feel when you're asked to give it back - it's that good!