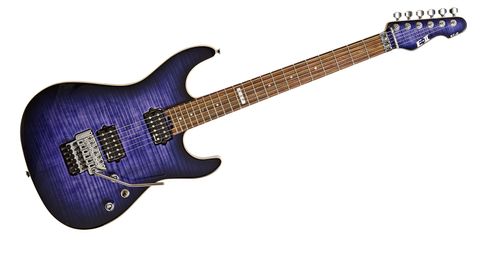 A great high-end rock guitar. With impressive spec and performance, it's up there with the best.

ESP's E-II series emerged earlier this year with the announcement that the firm was restructuring its products into five strands. The E-II range is built in Japan by the same luthiers that turn their routers, chisels and sanders to, among other things, the eye-popping ESP Custom Shop range of guitars. Here we take a look at the ST-2 - an out-and-out rock guitar.

The ST-2 is close to ESP's traditional rock home turf but attempts to forge a new direction. We're still a little uncomfortable in dusting off the term 'shredder's guitar', but we'd suggest that this is as close as ESP has got to that stripped-down, no-nonsense 80s rock vibe in quite some time.

Sibling E-II models such as the Horizon and M certainly fit the bill to a point, but the proliferation of body contours and, in the case of the M, active EMGs, may result in players looking for that mix of ESP style with a Charvel-esque stripped- down approach turning away.

Before we get to the nitty gritty, just take another look at the ST-2. Mentioning Ibanez in an E-II review is akin to bringing photos of previous girlfriends to your wedding reception, but the fine grain of the flamed maple top, uncluttered by a scratchplate, uncovered DiMarzio pickups and a classic double-locking whammy did make us think of Hoshino Gakki: compare the look of the ST-2 with the Ibanez RG920QM to see what we're driving at.

Whatever the aesthetic similarities, the ST-2 looks great with its Reindeer Blue finish (no, nor us!) showing off the flamed maple top beautifully. Touches such as the natural edge 'binding' and matching colour headstock face give a truly opulent air.

The body is basswood, which did surprise us, as we'd assumed alder would have been used.

"Yes! It's true that the body wood is basswood," ESP USA's Todd Binder tells us. "Basswood has a tonal property that is unique, and sought after by tone-freak guitar players: Edward Van Halen comes to mind, as do countless others. It's a modern alternative to the more traditional alder that we use in the ST-2's sibling, the ST-1; it's much lighter, too.

"I'd say that a good tonal characteristic about basswood is that it is a neutral-sounding wood, so you can really hear all the components such as pickups and hardware and don't have to worry about the body colouring the tone too much."

It's nice to see DiMarzio pickups here, and the units loaded onto the ST-2 are described as custom 'Steve Blucher Design'. DiMarzio's Steve Blucher is, of course, a legend within the industry as one of the most dynamic pickup designers around and, although technical details concerning the units' make-up are scarce, his name is good enough for us.

Thanks in part to its basswood body, the ST-2 is comfortable and light strapped on, and with some clever shaping around the heel and rear of the lower cutaway, it's easy to get to grips with, too.

It's also available with a maple 'board, the rosewood of our example has been well finished, with a noticeably high grade of abalone used for the dot markers, and the feel of the maple neck is somewhere between the flatter nature of the Ibanez Wizard and more chubby nature of a modern Charvel neck.

Plugging-in, the ST-2 sounds immediately focused; and raising the gain, the clarity remains, as does that 'breathy' nature of the basswood.

As for its more obvious rock voices, it's certainly possible to create a passable Strat-like clean chop by using the mixed pickup position in single-coil split mode; adding some chorus gives what a number of old-school multi-effects units used to describe as the 'Luke Studio Clean' tone. Nice.

The Floyd Rose stays perfectly in tune no matter what you throw at it, the skinny neck is a dream to play, and the guitar looks great. We can't really ask for more than that in a modern rock instrument.

Although 'ESP' is inlaid into the 12th fret position of both guitars, it remains a nagging shame that the headstock doesn't also bear that familiar logo. But like PRS's S2 range, ESP's E-II guitars are made in the same country as the premium models, just at trimmer prices.

The ST-2 is designed to rock, that much is obvious, but we're certain that instrumentalists will find much to get excited about too: a great neck, custom-wound pickups and some gorgeous flamed maple into the bargain? Count us in.

Whatever the name on the headstock, this offers a great deal to serious players - if that's you, you need to check it out.