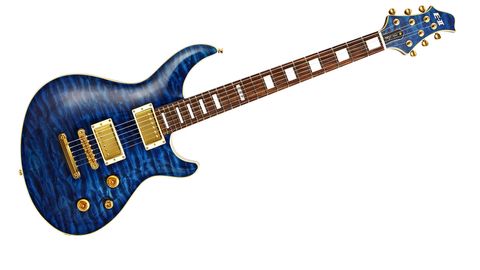 A modern tone-machine for contemporary blues, restrained rock, jazzy fusion and much more.

ESP's E-II guitars will be new to many of you, but they are now widely available from the retail outlet of your choice, after first being announced last year. Launched at 2014's Winter NAMM, the Mystique is a new model that's tricky to pigeonhole.

ESP, along with the sizable presence of its sub-brand LTD, is one of the big players in the metal and hard-rocking world. But its also a brand that's dedicated to spreading its wings and flying away from its hugely popular EMG-loaded, seven- and eight-string heartland and trying to explore new designs and musical genres.

The first thing you notice about the Mystique is its weight. At 8.4 pounds, it's hardly the heaviest guitar we've played, but it has a reassuring heft and you do find you want to pick it up and give it an idle strum.

The mahogany body is capped by a generous slab of heavily quilted maple, bound in vintage white, and finished in a lovely looking Marine Blue to almost the level of the brand it tips its hat to: PRS.

Indeed, the lines of the Mystique look as if ESP has taken a Custom and given it a longer scale length and an offset makeover, resulting in an elongated upper horn and widened lower cutaway, mixing style with the practical advantage of unrestricted upper-fret access.

Pickups comprise the somewhat unusual pairing of a Seymour Duncan JB in the bridge with an Alnico Pro II at neck, controlled by master volume and tone pots, and nestling under gold-plated covers. We say 'unusual' because the two units ESP has chosen are very different in performance; the JB is the rock player's go-to humbucker, while the APH-1 is much more vintage-y in slant.

So while the JB/'59 pickup combo is a more established favourite for many companies, we'll defer our judgment until we plug in.

The Mystique may not look much like a Les Paul, even with its double cutaway and slightly longer Fender-like scale length, but it really goes for that sound, perhaps with a slightly tighter bass.

Any misgivings we had concerning the pickup choice dissipate within minutes of plugging in. The bridge JB may be a medium/hot 'bucker, but the time-tested mahogany/maple construction seems to act as the perfect 'mellower', removing any harsh edges. It's a great rock tone, and it leaves us smiling.

The neck pickup is lower in output, but changing between the two with an amp just set to break-up gives a wealth of disparate tones that will suit many styles. Modern blues licks are strident and up-front, with the neck pickup ideal for more lilting passages. The guitar feels and plays wonderfully, too, with a neck that mixes the roundness of a vintage profile with some modern width.

Although 'ESP' is inlaid into the 12th fret position of both guitars, it remains a nagging shame that the headstock doesn't also bear that familiar logo. But like PRS's S2 range, ESP's E-II guitars are made in the same country as the premium models, just at trimmer prices.

The Mystique is a tone-machine, pure and simple, and beneath the bells and whistles of the heavily quilted maple top and gold-plated fixtures is a versatile and eminently playable instrument.