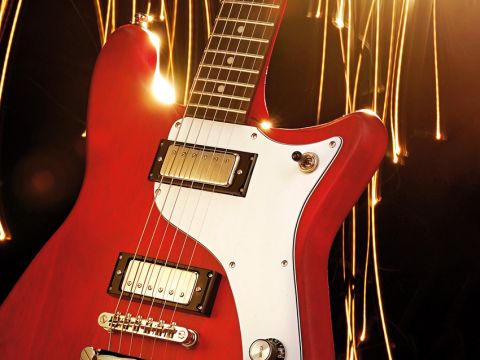 More proof that some of the charming models from Epiphone's glorious yesteryear can be turned into fun yet highly usable modern rock machines for a price that won't break the bank.

First introduced in 1959, and made in Gibson's Kalamazoo factory, the Wilshire initially featured a symmetrical body with a pair of P-90 single-coil pickups and a symmetrical three-aside headstock with pearl Epiphone inlay.

But around the same time that Bobby Moore and the boys were finishing off the Germans in the World Cup final, Epiphone came up with the final blueprint for the Wilshire - hence the 1966 Worn Wilshire title of this recreation.

Of course, it's now made in the Far East, but in many respects it's just as Epiphone-esque as the original - still affordable and well spec'd. The Wilshire's cutesy Les Paul Junior come SG-style asymmetrical body is just 36mm deep - in contrast to the Les Paul Junior Satin's 45mm bulk - and like the original, has an elongated top horn and soft, rounded edges.

Here we have a delightful vintage-style worn cherry stain finish that employs the same 'limed mahogany' filler technique as applied to the original; giving the mahogany's grain a dark fleck effect that's visible through the finish - much the same technique was applied to Gibson's Junior models.

The SG comparison continues with a long unsupported neck that joins the body at the 22nd fret and offers excellent upper fret access. It has a comfortable and familiar-feeling slim-taper sixties neck profile, topped off by a clean rosewood fingerboard with simple, tasteful dot inlays.

One of the more distinctive changes to the latter Wilshire was the headstock. In 1963 Epiphone introduced the futuristic 'batwing' design that we see here. It features six-a-side chrome-plated tuners and Epiphone's vintage-style gold silkscreen headstock logo.

Additionally, the two mini-humbuckers have the same basic specification as the originals that came as standard in 1962. They're both fixed to the body via replica black pickup surrounds and adjusted with two height adjustment screws either side of the casing. The Wilshire's sweeping, Tele Custom-style pickguard houses all other electrics, including two volume and tone controls, with goofy amp knobs to boot, and a rather clunky feeling three-way toggle switch.

Hear it in action in the following clips, beginning with the bridge pickup, then the twin pickup mix, then the neck unit:

With its mini-humbucker arrangement we'd expect a brighter and clearer tonality than an SG. And kicking off with a slightly crunchy/clean tone on our low-powered vintage Fender-style test amp, it's evident that this Wilshire captures that vintage vibe nicely.

The clean tones are defined yet effortlessly plumy in the mid-range and offer up some tasty soulful blues and jazz vibes using the dual and neck selections, while the bridge pickup has a little more juice for old-school, classic rock rhythm playing.

And with a driven valve amp, the Wilshire doesn't disappoint. There's a real SG-meets-Tele vibe here, as we get plenty of girth from the mahogany construction, but with some Tele-esque twang. It's an inviting and raucous garage rock tone and packs a hefty punch.

We would imagine that the likes of Jack White or even Biffy Clyro's Simon Neil would enjoy its snappy looks, versatility and vintage rock tones. That said, with some heavier strings and higher action it would make a brilliant low-priced option for slide players looking for some fun but filthy tones.

With a great neck shape, good weight and ample power from its twin mini-humbuckers, the Wilshire should fit a wide variety of rock-based playing styles. If you're into raw rock power, but on a modest budget, it's a fun, affordable alternative to the usual suspects.