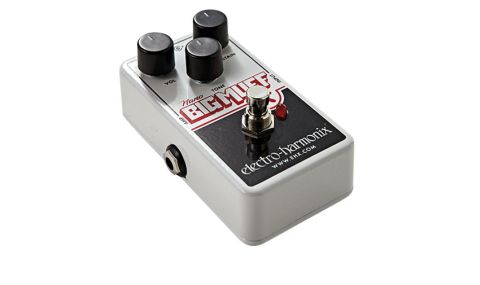 Honey, they shrunk the Muff... but it sounds just as good!

The Electro-Harmonix Big Muff Pi has to be one of the all-time iconic pedals, but in its original form may be just a little unwieldy for the modern pedalboard.

We've already had the more practical little Big Muff, introduced eight years ago, but now EHX has taken things a stage further and squeezed the circuitry into this Nano version.

The Big Muff Pi has always been wonderfully versatile pedal that offers many flavours of fuzz and distortion partly due to the wide-ranging tone knob, which will go all the way from a rounded flutey tone ideal for David Gilmour or Ernie Isley leads, through all the grunge and alt-rock tones, to a brighter, raucous garage fuzz.

So does the Nano do all this like its big brothers? Hell yes! We checked it alongside Muffs from 1973 and 1984 as well as a fairly newish one and, minor tonal variations aside, it did all that was asked of it. This size at this price gives nobody an excuse not to have a Big Muff underfoot.