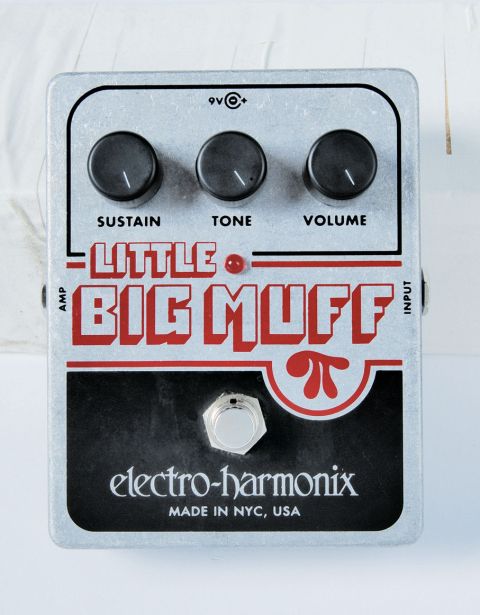 The Little Big Muff gives fans of the Muff sound the compact design, sturdiness and sensible power options they´ve coveted for years. Quite simply, if you like fuzzboxes, this is a nigh-on essential purchase, even if you already own one of its physically bigger siblings.

Along with Tube Screamer-style overdrive, fuzz is one of the most common boutique effects, with people prepared to shell out big bucks to tone gurus with the promise of capturing the classic sounds of their heroes in a roadworthy unit.

Inevitably, a pedal as iconic as the suggestively monikered Big Muff Pi hasn't escaped its share of high-spec imitators. In recent years, this has often been in response to the inflated price of vintage examples, along with perceived shortcomings in modern reissued pedals. However, this design from Electro-Harmonix will give lovers of all things fuzzy something to smile about.

The key complaints that players have voiced since the release of the reissued Big Muffs in the mid-'90s revolve around the oversized housings, which command a huge amount of pedalboard real estate (considering the circuit´s relative simplicity) without being the most robust when subjected to frequent gigging.

This isn't the first Little Big Muff to appear in the Electro-Harmonix catalogue. A pedal with the same name existed in the late '70s, housed in a Small Clone-sized enclosure, but it featured just a single volume control and a two-way tone slider switch, with a milder level of distortion on tap.

With the new Little Big Muff, the Electro-Harmonix design team have listened to what players want, delivering a pedal that promises to address all the issues with the full-size versions, with no compromises in terms of sonic performance.

With regard to power, unlike the full-size models that require an old-school mini-jack adaptor if you want to utilise a 9v power supply, the new Little Big Muff has a standard barrel socket, just like a BOSS or DigiTech pedal.

Adapting the aesthetic of the full-size NYC version, the Little Big Muff's compact die-cast housing is smart and robust, although lacking an access hatch for battery changes, so you have to unscrew the back. That said, a circuit like this has such a low current draw that batteries tend to last for quite some time.

After testing the Little Big Muff, it´s abundantly clear that fans of subtlety need not apply. If you´re familiar with the kind of strident fuzztones that are a huge part of the sounds of Mudhoney, Jack White and Billy Corgan, you know what to expect.

When compared to the contemporary Russian Sovtek and NYC reissue Muffs, the Little Big Muff is voiced somewhere between the two, arguably sounding a little warmer and a touch more retro.

The pedal delivers a huge dose of sustain and a dense, sizzling roar that, on its inception way back in 1969, sounded quite unlike any other dirtbox, and which still maintains an instantly recognisable aural signature.

As with all Big Muffs, the tone control´s position is critical as it has a vast sweep and a huge impact on where the sound sits in the mix, particularly live. A small adjustment either way can throw the sound into relief or suck it all away, so experiment at stage volume to see where the tone best sits in terms of its interaction with your bassist and any other guitarists.

As a starting point, try setting the tone and sustain controls to around two o´ clock, add volume to taste, and just try not to grin from ear to ear when you bang out a riff on the low E string.

Single-coil pickups appeal to the trashier side of the Little Big Muff's nature, while humbuckers deliver the cream. Just don´t expect any significant degree of transparency or the natural character of your instrument to come through once the sustain control advances over halfway.

One of the great things is that it doesn't matter what other gear you have. Unlike a pedal such as a Tube Screamer that relies on the right combination of guitar and amplifier in order to deliver, the Little Big Muff does the business whether you´re playing a £3,000 custom build or a scrag end of plywood with the cheapest of pickups.