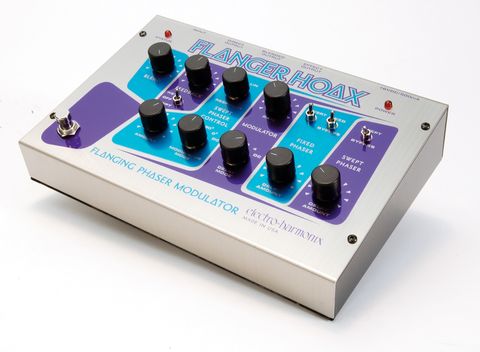 The Flanger Hoax is a great, but complex sonic resource, capable of modulation combinations that can create a vast range of sounds. Ideal for experimentalists.

Offering more than a conventional stompbox flanger, E-H say that the Flanger Hoax is one of the most powerful modulation instruments ever designed. And that might just be true, combining as it does phase shift and flanging with the intention of creating varied sonic textures.

A large pedal running off a supplied 18V adaptor, the Flanger Hoax is mono only with a single guitar input and three outputs - one for dry sound only, one for effect only and one (like any other stompbox) for a combined signal. A blend knob lets you choose the exact mix of dry guitar sound and effect at this output.

Besides the on/off stomp switch there are no less than nine knobs and four toggle switches, arranged in colour-coded sections that relate to the various functions.

Technically the Flanger Hoax consists of two phaser sections (one fixed, one swept), each with an associated delay line. The swept phaser is modulated by a low frequency sine wave, which can also sweep the delay lines. Each phaser can be individually bypassed so that the delay lines can be accessed without any phase shift.

A feedback control can be set to send either the pedal's wet (effect) output or just the output of the swept phaser back into the phaser circuits. Got all that?

Electro-Harmonix seems to be under the impression that such technical explanations will suffice and it provides a four page operating instructions leaflet that shows a circuit diagram and gives a brief technical explanation of what each knob or switch does. We suspect, though, that not every guitarist will have an electronics degree and that a more thorough and descriptive explanation of what each control does to the actual sound might have been much more appropriate.

As it is, it's more a case of plugging in, tweaking a few knobs and switches and listening to what you get.

With all its controls the Flanger Hoax does initially seem a daunting prospect, but by proceeding logically and trying functions out individually at first before combining them, it becomes apparent just what each knob and switch actually does for the sound as full capability is exposed.

Forgetting the phase shifting initially, it's the two always-on delay lines, ranging from 1 to 11 milliseconds, which provide the key to the sound. A five-way delay mode switch determines which of the two delays is swept. You can have either, neither or both being swept.

With this switch, and the careful juxtaposition of the two delay amount knobs and the modulator rate, you can dial in a wide range of effects from ever-so-subtle tonal shifts through various flanging and chorus options.

A phase invert switch thickens or thins the sound to double the options available and feedback (regeneration) can be applied, bringing in some of the more recognisably extreme flanging sounds and hollow metallic timbres reminiscent of ring modulation. Bringing in either or both of the phase shifts gives even more options, with small tweaks of each knob yielding ever more interesting sonic vistas.

Overall, once you've got the hang of how each control interacts with the rest, the versatility of the Flanger Hoax becomes apparent. There is a massive range of modulation sounds waiting to be dialled up, from weird off-the-wall stuff through to the more familiar territory of rotary speaker emulation, burbling underwater Univibe sound-alikes and conventional phaser, chorus and flanger effects.

Although not an overly noisy pedal per se, the Flanger Hoax does have its moments and can get quite hissy on certain settings, particularly with short delays dialled. There are, however, some excellent sounds that can be coaxed from it and it can come spectacularly alive with a distortion pedal in front of it.