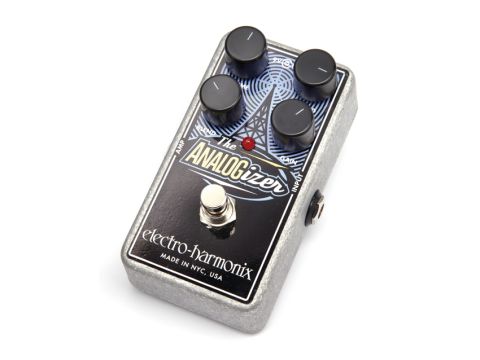 The Analogizer becomes less noticeable the longer you leave it switched in - but turn it off and you'll realise how thin your rig can sound without it.

When you're talking about 'analogue sound' you'll probably find yourself using adjectives such as 'warm' and 'fat'.

There's a reason why these words get used so much. In a digital age where the purest of tones are available, we run the risk of sounding clinical.

There's nothing wrong with a bit of grit; it stops our clean sounds from appearing weak and plastic. That's where the Analogizer steps in.

It processes your signal with a mixture of short (3.5ms to 65ms) analogue delay, and up to 26dB of overdrive. The delay time is set with the Spread control, and you can mix your dry guitar sound with the delayed signal using the Blend control.

If you've ever tried an analogue delay such as EHX's Memory Man, you'll already know the kind of sound the Analogizer produces. Kick it in, and it immediately adds girth to your sound with a thick mid-rich character.

Upping the delay time with the Spread knob acts like a double-tracked guitar - more ambient with a slight lag between the two signals. If you don't want any delay at all, you can turn it off by pushing the Blend control to the left. Pushing the gain at this point turns the Analogizer into an effective boost/OD pedal for the front-end of your amp.