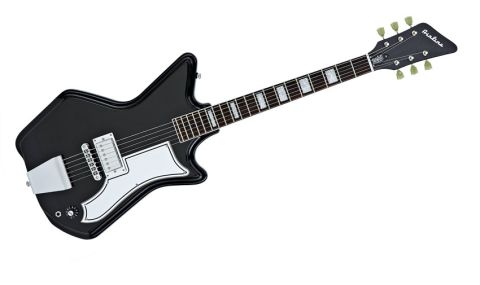 A leftfield, funky treat of a guitar that feels and sounds quite inspirational.

Eastwood unashamedly raids the back catalogues of long-defunct guitar companies and fills a sizeable hole in the market. This Airline repro is a perfect case in point. What were they thinking back in the day?

Originally, of course, the body was made of plastic; here it's 'chambered mahogany'. But under the glossy opaque finish, it's actually quite hollow - the body is routed out leaving a block under the bridge and lower body, but forward of that it's pretty airy; it's sealed with a thin 5mm top. The contrasting white rubber fillets around the edges - originally used to join the two moulded halves of the hollow body - are retained, as is the original light weight.

With its bound rosewood fingerboard, pearloid block inlays and coach-lined white scratchplate, it's an entirely flashier affair than its puritanical single-pickup rivals the Fender Esquire and Gibson Les Paul Junior. The chamfered edges follow the shape of the original moulded body and the neck is a bolt-on with four recessed screws and no neck plate.

Hardware is quality, too, with Wilkinson Deluxe Kluson-like tuners, which are nice and smooth in use, a Tone Pros locking tune-o-matic-style bridge and a solid trapeze tailpiece with just enough flex for vibrato effects.

A single humbucker-size covered pickup with no label ID underneath is controlled by a lone volume knob placed (too) close to the top-mounted output jack. Strangely, in the guitar's spec, the pickup is referred to as a 'single-coil' and with a DC resistance reading of 6.75k ohms, it probably is.

The neck shape is a broader-feeling, slightly thinner-depthed flatter 'C' than the Esquire, with a flatter fingerboard radius and bigger frets, a very different flavour to the Fender.

Plug in the Airline and, yes, it seems we do have a single-coil, judging by the hum and general sound. It's reasonably hot in output, but doesn't go overboard with high-end zing and offers a decent fullness.

In fact, it's instant Jumpin' Jack Flash: beautiful for 60s chime-y rock and pop, especially with the volume knocked back a touch, which smoothes the highs a little. It's a nice feeling, lightweight guitar, too, though a tone control would really make a difference.

Heavier gains work well, there's a lower feedback threshold than a solidbody, and it's all too easy to get lost in old-school effects. It is a bit of a sleeper, really, and one that would suit more left-field sounds with a definite semi-solid unpredictability - a sonic mangler's dream?

The Eastwood Airline has grungy alt-rock written all over it, and any player who likes the different Jack White-approved vibe will take to this one instantly. If you lean on the more out-there, creative side of the tracks, this might suit you perfectly.

It's a little pricier than near rivals, but does include a tweed case and even some literal case candy in the form of an actual Curly Wurly... which we hope wasn't a bribe, because we scoffed it anyway.