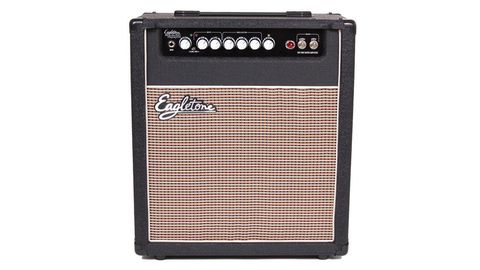 For home recording and practice, this isn't the amp for you. However, for melting faces and making your audience feel like they've been punched in the chest, bring it on.

The maker of this guitar amp is one of those brands that wasn't around in the 60s, so it can't rely on marketing material filled with pictures of Jimi Hendrix and Pete Townshend smashing its products up. Never mind, we don't need that stuff anyway. What we want is something that rocks like a beast without breaking the bank.

The Raging 15R is the valve-powered beast in question, and it features an effects loop, gain, level (kind of a master volume for the dirty channel) and treble, middle and bass controls, plus a knob to control the level of reverb. Eagletone has also thrown in a footswitch that appears to be made of French Army surplus armour plating.

That's right, this comes to you courtesy of our neighbours across the channel, through French internet dealer Woodbrass. However, the Raging 15R has been treated to the classic combination of three 12AX7 preamp valves and two EL84 output valves. This heady mixture is favoured by Brit maker, Vox for its legendary AC15 amp. So, French it may be, but it speaks the Queen's English.

While the rest of the amp seems to be well-made, our review unit arrived with the speaker grille jammed in at an angle, causing the screws to damage the sides of the cab. It's only a cosmetic issue, but unless you make the trip to Paris to visit Woodbrass's store in person, you won't be able to inspect the amp for yourself until it arrives on your doorstep.

Granted, 15 watts is relatively low-powered, but don't be fooled into thinking this is suitable for bedroom playing. It's scarily loud. In a confined space, it made us sweaty, anxious and afraid, like when a man in a vest with a pitbull sits next to you on the bus. If anything, it's too loud: it goes from silent to huge with very little in between. It is playable at low volumes, but you have to keep either the gain or the level right down to compensate.

Crank it up, and those classically British EL84s kick out a great rock sound that's more Orange than Marshall, with more gain than the typical classic rock sound. Roll off the treble control and you get that great Josh Homme's Kyuss/ Queens Of The Stone Age thump. This is a seriously loud piece of kit, providing easily enough grunt to fill the back room of a pub.

While the dirty channel packs filth from zero through to 10, you have to push the clean channel very hard indeed to make it even think about breaking up. That means tons of jangly, chiming highs, and with the reverb turned on you could have combed us a quiff and called us daddio.

The problem is that there's not much in between these two excellent sounds. There's very little scope for the just-on-the-edge-of-breakup tone that many guitarists feel is the sweet spot - it's all or nothing with this one.