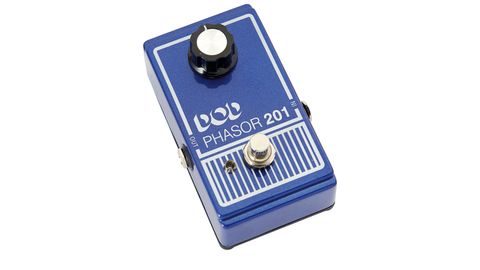 A welcome return for a mellow-voiced phaser.

A single-knob configuration, as on MXR's Phase 90, may well be the classic design for a guitarist's phaser: if the phasing's core sound works for you, the only thing you need to tweak is its speed.

The Phasor 201, DOD's first 70s-era phaser design, follows that as-simple-as-it-comes format, although as a two-stage phaser the 201 has more in common with the Phase 45 than the four-stage Phase 90.

While two-stage phasers are generally perceived to have milder, less pronounced phasing than designs with more stages, it is a sound that suits some players and sits well with various playing styles.

The 201 delivers musical phasing with a mellow character that starts from an otherworldly watery haze and goes through to a fast warble that emulates a fast rotary speaker sound.

Whether you're recreating classic rock sounds or creating something new, a phaser can cover a host of possibilities, and the 201 will do just that.