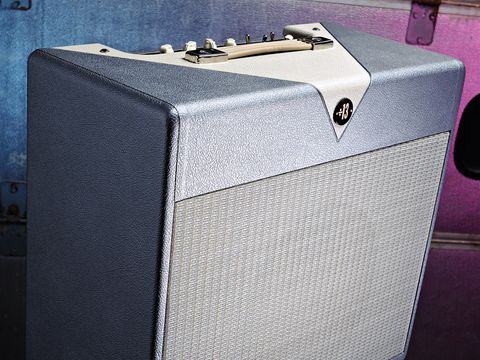 An exceptional piece of work, and one of the best crossovers between American and British classic guitar tones money can buy.

Divided By 13 boss Fred Taccone has been building amplifiers for around the past seven years in Los Angeles. His amps' special tones have found appeal with some of the world's top players, including Rusty Anderson, who you may have seen tearing the house down with Paul McCartney.

Like all of Fred's amps that we've seen, the EDT is built to take a serious pro-level hammering. The cabinet is neatly constructed from multi-laminated birch ply with finger-jointed corners and covered in Divided By 13's trademark two-tone vinyl, with a contrasting chevron and inlaid piping which starts on the cabinet's top and finishes on the front face.

It takes real skill to do this kind of work neatly and it's very neat indeed on the EDT. Just above the point of the chevron is the '÷13' logo, which lights up when the mains is switched on to let you know the amp is cooking. Cool and functional at the same time.

Inside the EDT's steel chassis, the electronics are built up on a black vulcanised eyelet board - a piece of insulating material with small rivets punched into it at strategic locations, into which the components are soldered.

This is the traditional American way of doing things - Fender made all its amps like this up until the early 1980s, when the Fullerton factory closed. It's just as tough as the turret or tag-board method of amp building that used to rule in the UK and Europe, and offers more freedom with component positioning.

The EDT might have just one preamp channel, but with a total of seven valves there's a lot going on inside. By and large the wiring and soldering is very neatly executed, using a mixture of cloth and PVC heavy gauge hook-up, while all the components are of the highest standard.

The EDT's controls are quite straightforward. The single-channel preamp features volume, treble, bass and reverb level, fed by a pair of high- and low-sensitivity inputs. There's a pull boost on the volume control, and underneath next to the speaker outlets there's also a damping switch that varies the amount of negative feedback applied to the output stage.

There are three hefty toggle switches on the front panel - two are for the usual mains and standby functions, while the third switches the EDT between Class AB and Class A modes, varying the output from 29 to 13 watts.

Overall, the EDT13/29 has the same 'back to the future' vibe that makes all Divided By 13s so distinctive - it's a modern amp that looks and almost smells like it was made 50 years ago.

When an amp costs as much as this one does, you'd want it to sound really special, and probably the main reason why Divided By 13 has become such a coveted brand is because all of Fred's designs have superlative tone - not necessarily in someone's living room, but in the most demanding of pro applications for live and recording use. The EDT13/29 is certainly no exception.

One thing that lifts this amp above the ordinary is the use of KT66 output valves, which are similar to 6L6s but have their own unique sonic footprint. Well known for being in Eric Clapton's Marshall combo when he recorded the groundbreaking 'Beano' album with John Mayall's Bluesbreakers, the KT66 is the quintessential British output valve.

Originally developed by Marconi Osram Valve as a European 6L6 equivalent, its highly detailed treble response has made it a favourite for hi-fi. It's this special high-end - detailed and bright without being sharp or piercing - which characterises the EDT13/29.

At lower volume levels, before the amp starts to distort, the clarity is amazing - it's almost like having a separate preamp for each string. The amp has a very fast response that makes notes jump out of the loudspeaker. As you wind up the volume, however, the valve rectifier's natural compression tames this somewhat, while pushing the KT66s a little adds a sweet chiming effect to chords.

Despite owing a lot to early Fender designs, the EDT has a definite Marshall edge to it when pushed hard in Class AB mode. However, if you run it in Class A, switch out the speaker damping and pull out the gain boost on the volume control, you're in Tweed City, with a fat toothy mid-range, singing treble and powerful, fast bass response; all of which adds up to the EDT sounding a lot bigger than it actually is.

At which point we should mention that your neighbours probably won't thank you for trying this at home because, like all Divided By 13 amps, the EDT 13/29 is seriously loud. With no master volume, all the best sounds come together at live stage levels - as you'd expect from an amp aimed primarily at professional users. Both single-coil and humbucking pickups sound superb, and the reverb is rich and creamy too, with a long delay that tails off nicely without getting too crashy.

We think the EDT13/29 is simply one of the best-looking, best-sounding and best responding amps we've ever plugged in to. There aren't many amps that can hold a candle to the EDT's superb tone. However, the tiny handful that can are phenomenal performers and will give you a hard time when it comes to choosing. The EDT's only downer is its price, apart from that it's hard to pick a fault.