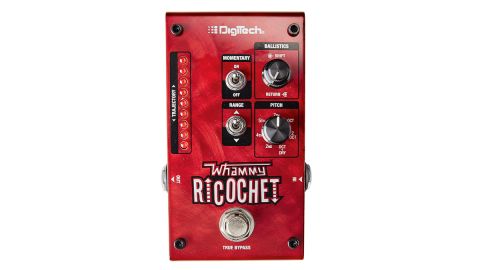 A good alternative if you don't need the treadle: instant Whammy effects in a simple package.

The distinctive foot-controlled pitch-shifting of DigiTech's Whammy has attracted many famous users.

The Whammy, though, is a rather large pedal… unless you lose that big ol' treadle, of course!

That's exactly what DigiTech has done with the Whammy Ricochet, where you set the amount and speed of the pitch- shifting with knobs instead, and trigger it with a footswitch. The Ricochet offers pitch changes that can go up or down a 2nd, 4th, 5th, 7th, octave or two octaves, plus a setting that offers an octave mixed with the dry signal.

A dual-concentric Ballistics knob determines the speed of the shift, with one knob to set how fast the pitch initially changes and another one setting the speed at which it goes back to normal.

The change is triggered by the footswitch, which has two modes. The first is 'momentary' - the pitch changes while your foot is on the switch, but reverts to normal when you take your foot off. The second is a latching mode (just like any normal effects pedal) - the pitch can change and stay until you hit the switch again.

The speed and the direction of transition of the pitch is shown on the Trajectory LED ladder. You can set that speed at minimum to get a pitch-shift that is instant or set it longer to hear the pitch-bending transition - the maximum is about eight seconds.

There are two ways to use this. One is to call up drop tunings or a virtual capo: down an octave to play bass; down, say, a 5th to emulate a baritone; or up with the Octave&Dry setting for faux 12-string sounds similar to those found in DigiTech's Mosaic pedal (which is fine to add chime and jangle where needed).

The other is more for 'Whammy' effects where you want the bend in the pitch to be prominent - Dimebag-style octave and double octave squeals thrown in with the momentary switch during solos, perhaps.

It works seamlessly and sounds like one of the larger Whammy units, so if you're happy for your Whammy to be confined to switching between two pitches, the Ricochet is for you. For those who want finer control over the pitch change in real-time, there are still the treadle-equipped versions.