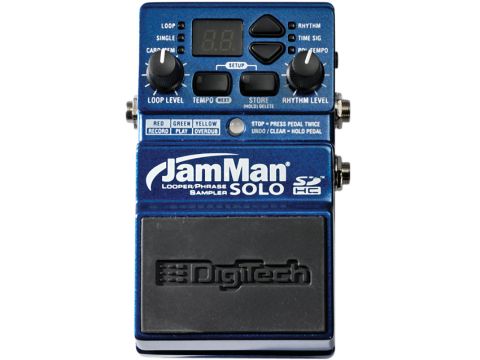 A smart looper with plenty of power and a small footprint.

We've all seen that guy down at the local open mic night. The ever-so-slightly introverted singer-songwriter who woos onlookers by tapping out a beat on his electro acoustic, wows them by overdubbing some heartfelt chords over the top, and before you know it, this smart-arse has built an entire backing track out of nothing. How does he do it? He uses a looper pedal.

Alongside the more expensive JamMan Stereo, DigiTech's JamMan Solo is the latest addition to its line of loopers. It scales most of the features of the original JamMan (minus the mic input) into a single-sized pedal with added extra memory and USB connectivity, allowing you to record the signal from your guitar (or iPod, CD player or other line-level devices using aux in) to create loops for jamming along with.

You can record your loop as a 'one shot' phrase in Single mode or a repeating phrase in Loop mode, the latter of which allows you to overdub extra parts on top. The loops are then stored in its internal memory (35 minutes, up to 99 loops) or you can use the new SD card slot for up to 32GB of additional storage (about 16 hours).

Operation is easy enough: stomp on the pedal to put it in record, playback or overdub mode, and its LED indicator changes colour to correspond to your selection. You can access DigiTech's free JamManager software via the USB port, and arrange the order of your loops in the memory slots.

If you've created audio files using a computer you can drag-and-drop them into the pedal too. The Loop Up/Down switch lets you move seamlessly between a verse/chorus section of your song, and it only cycles to the next loop when the current one ends, thus avoiding timing errors.

The concept sounds great, but it's actually where the Solo falls down slightly. To flick through your loops without taking your hands off your guitar, you'll need the FS3X footswitch (a built-in feature of the JamMan Stereo) at an additional cost of £47.

Looper pedals can be used as tools for writing extra guitar parts, building textures and harmonising with yourself. It's an addictive process; both singer-songwriters tired of simplistic strumming and sole guitarists in bands can benefit from the extra depth it offers.

Sure, the JamMan Stereo provides greater usability and a reverse playback mode, but with it comes a £335 price tag. So if you want to be that guy at the open mic night without spending too much, there's a lot to be said for the JamMan Solo.