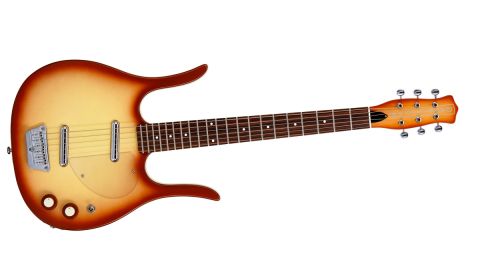 The '58 Longhorn guitar scores big points on price, playability and tonal versatility. They're built to last. Just don't loan them to Mr Townshend.

Apparently inspired by the profile of an Ancient Greek harp called a lyre, no less, the original '58 Danelectro Longhorn Series was populated by three instruments.

The model #4423 Bass was accompanied by the #4623 Six-string Bass and the #4123 Guitarlin, a curious beast that pitched both guitar and mandolin sounds over its extended-length 31-fret fingerboard.

The Longhorn Guitarlin achieved a measure of cult status when godfather of punk, Link Wray, was pictured with his in the late 50s. Wray devotee Pete Townshend also employed a Guitarlin on stage with The Who in 1965. The relationship came to an abrupt end when he thrust it without mercy through the front of a Marshall cabinet.

This new Longhorn guitar features a three-way pickup selector toggle switch and maple neck which is secured to the body with four large screws. Back in the day, you only got three, set in a straight line.

The Longhorn body shape isn't all about show. The extended horns provide decent balance when the instruments are hanging from a strap, while the deep cutaways promote good upper fret access, compromised only slightly by the chunky union between the body and neck.

Playability is superb with a D neck profile and a 355mm (14-inch) fingerboard radius. The frets are described as medium in the sales literature, but in reality feel a mere junk-food binge away from fat, which makes for fluid string bending.

As ever, it's the 'in-series, both pickups engaged' position that unleashes a Dano guitar's fattest tone; imagine a humbucker with the clarity of a single coil. It sounds superb with overdrive for old-school hard-rock riffs like Jimmy's yet back off the filth and it sounds a bit like a fat Telecaster, just right for pedal-steel licks and rockabilly stuff.

If you want to hear a Dano at its rockabilly best, listen to the wonderful Rick Miller of American band Southern Culture On The Skids.

Finally, the neck position is sweet run clean but really comes alive with some overdrive and upper neck blues licks.

Vintage geeks such as the aforementioned Mr Miller will tell you that the new Danos don't have the mojo of the original US-built pawnshop prizes. But in terms of the Far East- sourced reissue years (circa 1998 to present), Danelectro is producing its best instruments right now.