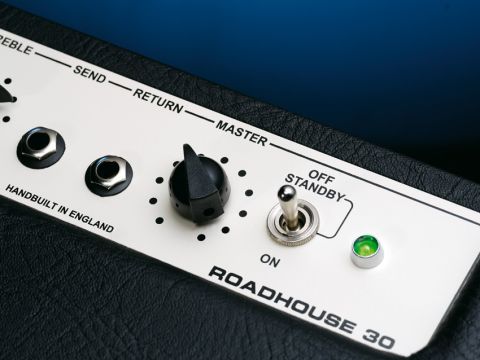 Cornford does it yet again with a killer amp that totally delivers on every front. Miss this one at your peril!

Cornford has successfully carved out a niche for itself at the top of the UK's boutique amp-building tree. Making its debut at this year's NAMM show in California, the Roadhouse range sees Cornford forsaking its traditional hand-wired circuits for the more affordable PCB - but money aside, can the new Roadhouse still cut the mustard?

On the outside, at least, there's little change from what we've come to expect from Cornford. The traditional maroon vinyl has been changed for black and the steel loudspeaker grille is now black fabric, but the Roadhouse's cabinet is as tough as ever, and very neatly put together.

It's also very substantial, measuring a good 40mm more than most combos front to back, and this extra depth means that it's not quite as portable as you'd expect.

Cornford's thick steel chassis is the same as ever, covered in a durable powder-coated finish with the panel lettering directly silk-screened onto it. Inside though, where you'd normally expect to see meticulous hand-wiring, almost all the Roadhouse's electronics are contained on one solidly supported and through-plated PCB, with a smaller board supporting the loudspeaker jacks.

"With plenty of range from that superlative EQ, any good guitar is going to sound great."

The Roadhouse 30's controls are typical Cornford - simple and easy to understand, yet deceptively versatile. It's a single channel, with gain, master volume and a standard three-band EQ. The versatility comes in the shape of a footswitchable boost with its own gain control, and send and return sockets for the Roadhouse's series effects loop.

Move to the rear/underneath of the chassis and there's even more versatility with no less than five speaker outlets, covering practically every combination you'd need if you wanted to hook this amp up to external cabinets. Even with one used up for the Roadhouse's front-mounted Celestion V30, that's still three more than most amps give you these days.

Powered up, the Roadhouse is practically noise free - something that is always a sign of a well-sorted circuit. The single-channel preamp's gain range is also very nicely balanced.

Using a regular Strat with medium output single-coils, you start to get a mild overdrive at around the halfway mark, making it easy to dial in exactly the right amount of response for that elusive 'nearly clean' bite. Humbuckers start to bite a little earlier - around 10 o'clock on the gain knob's travel.

The tone controls are very pleasing to use - you would think that all amps with treble, middle and bass knobs would have roughly the same kind of response, but that's a long way from the truth.

Sometimes you can almost hear the peaks and troughs between different frequency bands, but not on the Roadhouse's EQ. Here, treble, mid-range and bass combine seamlessly, making it easy to predict and repeat precise settings. It's very sweet and very musical with a good wide range, and is a delight to use.

With the boost engaged, you can add as little or as much filth as you want for lead work. This is, after all, a Cornford, and so it's easy to get practically any lead effect you want - from mean stabbing highs that really cut if you plug in a good Tele, to fluid sustain that begs for a good humbucker and a tasty, soaring ballad solo.

With plenty of range from that superlative EQ, any good guitar is going to sound great - pushing the mid-range up just makes everything thicker and punchier, with none of the nasal honk that many amps deliver when you do this.

We found our best balance with bass and treble on two o'clock, and the all-important mid-range at about 11 o'clock - demonstrating that all the best tones fall in the middle of the EQ's range, which is another sign of a well-sorted circuit.

Overall, the Roadhouse's lead tone has a different vibe to Cornford's stunning MK50 MkII head; it's more forgiving to play, with a tighter and more focused bass response, though it's not as multi-dimensional as the flagship.

Beyond any doubt, after nearly nine years, Cornford is still getting better and better at building great-sounding guitar amps. Okay, so maybe the Roadhouses aren't cheap - good things rarely are - however, they're way more affordable than Cornford's hand-wired models, representing excellent value for money with a unique quality of tone and character that's far above what you'd expect at this level.

Talking of tone, there aren't many amps at this price that come close; however, the few which do will be tough competition. The build standard is easily tough enough to handle extended use at the pro end of the market, while the price puts the legendary Cornford badge within reach of mere mortals as well as top pros.

If you're serious about your tone, you owe it to yourself and your guitar to hear this amp. We're more than glad we did!