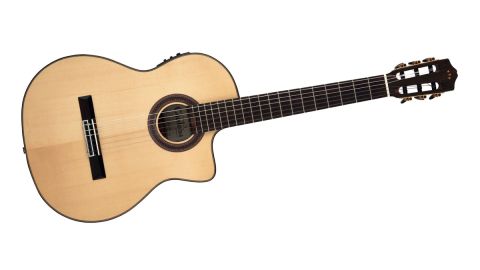 The GK Studio comes highly recommended for anyone who wants to, or already is, enjoying the nylon sound.

Córdoba? Isn't that a city in Spain? It is, and Córdoba does make guitars in Spain (the España Series is made in Valencia), but the majority - the Iberia, Fusion, Luthier and the beginner Protégé series, along with the steel-string Acero guitars - are made in China. The high-end Master Series is handmade in Oxnard, California, not too far from Córdoba's HQ in Santa Monica.

Córdoba's masterplan is to make the traditional classical and flamenco guitar available to all guitarists, not least with the modern 'crossover' guitar on review here, the Iberia GK Studio.

The GK Studio comes from a different side of the crossover category to the Córdoba Fusion 12. The GK Studio hails from the Iberia series and is a Gypsy Kings signature guitar - a band full of guitar players that seem a perfect fit for Córdoba with their crossover appeal.

The Studio, however, draws from a slightly different well and echoes the flamenco guitar more than the classical. Here, we have a slightly slimmer-depthed body, a more classical-like nut width of 50mm, and a similar C profile neck, but with a flat fingerboard. The Studio has laminated cypress back and sides and a solid European spruce top.

A standard classical 650mm scale - close to Fender's 648mm - is found on the GK Studio. The guitar is a cutaway electro powered by the almost ubiquitous Fishman Presys Blend system that mixes an under-saddle transducer with an internal mic and offers four-band EQ (if we include the notch filter), mic/pickup blend and tuner.

In a Chinese factory context, Córdoba has made a very good stab at aping traditional Spanish construction. The GK Studio uses seven-fan braces, with a thin piece of bridge reinforcement and machine-kerfed linings, top and bottom.

The internal soundhole rosette reinforcement is nicely carved and both guitars use a traditionally shaped 'slipper heel' neck block (traditionally part of the neck, not a separate piece) that connects all the parts: neck, sides, top and back. The visible curved shape gives the necessary reinforcement to the top, under the fingerboard, while the extended foot spreads the load of the strings' tension onto the back.

The Studio is lightweight - at 1.64kg makes this writer's Yamaha NCX900FM feel like a tank in comparison with its 2.04kg weight. The lightweight dual-action truss rod is a nod to modernism - again, not a feature of traditional Spanish instruments, but they weren't exported all around the globe. In the modern age, a truss rod makes sense.

Typically for a Chinese build, we see very tidy 'board edges bound with matching ebony and rosewood to hide the fret tangs. Rosettes are inlaid wood, a traditional multi-piece ringed design and body edges are rosewood-bound.

So many lower-end nylon-strings seem overbuilt and unresponsive acoustically - not the GK Studio. The Studio is a delight, from its feather-light weight to its quite un-classical neck that, despite its width, actually makes thumb- around positions relatively easy, certainly in lower positions.

With some visible slight distortion of the Studio's spruce top ('telegraphing' as Córdoba calls it), we'd guess its top is thinner than the company's Fusion 12 model, which might potentially give you problems amplified. But acoustically, and certainly for mic'd recording, the thinner top gives the Studio that sort of tonal lift that might make you choose one guitar over another.

The Studio is designed for a more 'flamenco'-type sound and it might surprise some players just how much bite it can have, especially played with some gusto with fingernails rather than your fingerpads.

It might be a little too attacking for mellower Latin and jazz, but then you can back off your attack. Again, possibly a personal thing, but it's nice to have that dynamic cut when you put your foot down.

Amplified, the Studio is well balanced, though if anything the sixth string is a little softer than the others. Under-saddle pickups can be tricky buggers in this regard - another reason to plug in before you pay up. However, the onboard controls and the tuner all work effectively.

As usual, the internal mic can only be used sparingly, with adds a soupçon of realism and a little ambience, but even using the notch filter and phase control, it's very prone to feedback in more crowded spaces and in proximity to monitors.

The Studio also benefits from leaving its EQ controls flat and plugging into either a LR Baggs Venue DI or Fishman's Platinum Pro outboard EQ. Of course, for playing more dynamic flamenco styles, check you have enough headroom in your signal path if you're going to hit hard.

For the money, this is a very well-sorted guitar, intelligently conceived and very nicely made. Yes, as supplied, the fret tops were a little rough and needed, but that Spanish influence is very welcome both in feel and acoustic sound, although the light build could present problems in louder amplified settings.

Still, for more moderate volume gigs, home, studio, practice and, well, just enjoyment, they have a lot going for them. Prices include a decent soft gigbag and high-quality (and expensive) Savarez strings.