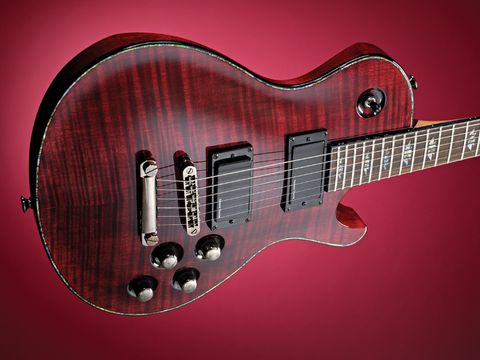 A lot of axe for your money - but it's a strong mid-price field out there at the mo.

Active pickups get us hot. Heck, even the adjective itself.

'Passive' evokes a singlecoil asleep in a deckchair with drool on its chin, but 'active' smacks of danger and aggro.

Tonally, there's some truth in that. We could debate the merits of PAF vs EMG ad infinitum, and while there's no right answer, one point is generally accepted: if you want to rawk (as opposed to merely rock), you'll do it harder with these high-output, battery-powered signal-boosters.

"Velocity-wise, it leaves Les Paul derivatives standing and impresses with an unfinished profile that sweats less than lacquer."

Once upon a time, active humbuckers stood alongside moats, humidors and stag hunts as the preserve of the super-rich. No longer. Last month's Group Test saw us paying sub-£700 prices for EMG-armed singlecuts, and here we're punching above our financial weight again with Charvel's Desolation DS-1 ST.

With 10 fresh models in the Desolation range, the Californian luthier clearly wants a slice of the modern metal pie. We could have slummed it with cheaper models, featuring Charvel's own pickups, but screw that: we're not paying.

So it's all the way up to the top DS-1, and the twin active Seymour Duncan Blackouts that supply the firepower. Consider us tantalised.

Great pickups do not a killer guitar make, though. Before you even plug in, there are vital body and neck considerations, and here the DS-1 is a mixed bag.

On paper, Charvel's model is a traditional mahogany singlecut with a flame maple veneer (assuming you choose a 'trans' finish).

The body is seriously slim and light, and while this will probably be lapped up by mini-axemen, we're guessing it'll cost us sustain. Plus, it's frustrating to find it pulling forward slightly on the strap.

How about the neck? There are a few untidy scuffs along the fretboard binding, but you can't sniff at a through-neck, especially one as speedy as this double-octave, contoured-profile, jumbo-fretted speed demon.

Velocity-wise, it leaves Les Paul derivatives standing and impresses with an unfinished profile that sweats less than lacquer. That said, a big theoretical advantage of the through format is access, and even with a scalloped heel we found it a bit of a stretch to hit the teeny frets.

Sonically, the Blackouts are monsters. They're a little twangier than you might think when clean, which we like, but the slam of the distorted tone almost knocks you off your feet.

Thick, fat, dark and swaggering, these units make no apology for their metal leanings, and while you can't hear the maple, the warmth of the mahogany is brutal for down-tuning and hard rhythms. You could argue that you'll be playing so fast the lack of sustain is moot, which we guess we'd accept.

The only other slight issue is relative: with all those EMG 81s still fresh in our mind from the Group Test, we're not totally sure these units have the same top-end bite.

The Charvel DS-1 ST is a killer guitar. In any sane world, active Seymour Duncans and a through-neck for sub-£650 should be enough to start a stampede.

Yet there's some heavy artillery in the mid-price market these days, and the Charvel doesn't get resounding ticks in every box. It's certainly not desolation, but it's not quite unhindered jubilation either.