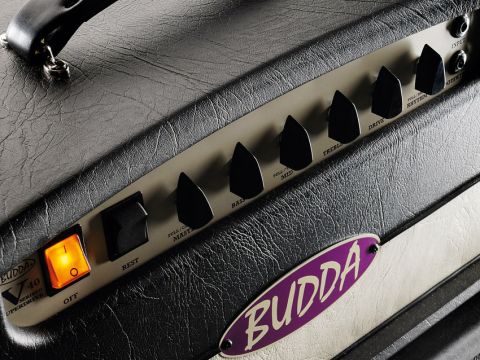 Budda amps have their own sound going on, the V-40 delivers a huge sonic punch and blends boutique cleans with classic rock distortions. If that's your bag, try it!

The Budda Superdrive V-40 is the boutique maker's first new amplifier to hit the UK since it formed a 'strategic alliance' with Peavey in 2009. Since then, Peavey has taken on manufacturing and marketing duties whereas previously, according to Peavey, Budda's manufacturing had been subcontracted to several outside sources.

The goal behind this is to ensure the same reliability found in other Peavey products, while retaining the tones for which Budda has become so highly regarded, thanks largely to its Superdrive 18, 30, 45 and 80 models, with their distinct purple and black styling.

Those amps continue to spearhead the Budda amp line, covering a fair amount of sonic ground, from crisp cleans to versatile modern overdrive tones. The V Series is all-new, however: a small range of more classically voiced amplifiers, with new livery and 20 and 40-watt models, including various cabinet combinations.

The V-40 we have here offers a welcoming old-school aesthetic, courtesy of the smart two-tone tuxedo vinyl covering, purple Budda logo and cheese wedge knobs. It's all very in-keeping with Budda's recognised vibe, so it fits in with the rest of the range and looks suitably boutique.

We get two channels, each with their own independent drive controls and an overall push/pull master volume control, which also allows you to toggle between the rhythm (push) and drive (pull) channels.

The push/pull Rhythm knob controls the amount of gain affecting the Rhythm channel, there's also a treble boost circuit (pull) for extra top-end sizzle. After that you get single treble, bass and a push/pull mid controls with a Thick (when pulled) mod, which fattens the midrange response on both channels.

One issue you find with having a shared feature set is balancing their respective attacks and volumes. The volume issue in this case, can be overcome by utilising the interactive Drive controls of both channels, however, what works for one, doesn't always work for the other.

On the inside, it seems nothing much has changed since the manufacturing switch. Opening up the V-40 and having a good look inside, we find a host of thick, good quality purple PCBs blended with expert hand-wiring for the best compromise between value, reliability and tone.

The V-40 pumps out a very loud 40-watts via four Electro-Harmonix 6V6 power valves and three Ruby Tube 12AX7 preamp valves. The 6V6 powervalve's plastic bases are independent of any PCB and are fixed onto the chassis.

The preamp valve-bases, however, are mounted directly onto the PCB, which is becoming par for the course in this type of amp. There's also a plastic fan situated next to a large output transformer to keep everything nice and cool. The fan's subtle hum when the V-40 is in operation isn't too intrusive and, in most cases, should be fine for studio work.

All of the electronics are housed in a thick-yet-lightweight aluminium chassis, helping relieve the weight of the typically large Budda head cab - the result is a perfectly luggable 14kg.

Around the back we have a mini-switch impedance selector that offers your usual 4, 8 and 16-ohm options next to two speaker outputs. There's also an effects loop send and return as well as a slave input with a slave level control.

Accompanying the V-40 is a closed-back 2 x 12 Budda cab. Utilising a solid pine construction with dovetailed corners, the Budda cab is voiced specifically to provide an extra midrange punch.

On the inside we find a pair of Budda Phat 12-inch loudspeakers that have been hand-wired along with a PCB input. Considering its depth and solid pine construction, the 2 x 12 is again cartable at around 14kg and suits the dimensions of the V-40 head perfectly.

Budda is famous for its big, crisp cleans and mid-gain rhythm tones, and here the V-40 doesn't disappoint. The V-40's rhythm channel has a spongy, sensitive touch and offers bold, clean Fender-type tones with plenty of bottom end straight off the bat.

As we push the drive knob towards 12 o'clock we quickly go from country clean to a gritty blues rhythm tone, which responds brilliantly with single-coil-equipped guitars and has a squashy, American tonality characterised by those 6V6s - it's like you're squeezing the notes out of the amp.

Pushing the Rhythm control further takes us from blues clean to AC/DC mean. There's ample gain for rock or heavy rock players who need more hair and fizz around the edges, though it retains the cut and attack of a cleaner tone.

The drive channel is certainly a beast. Even with medium gain, we get an injection of thudding, gig-ready volume and relentless attack. It has that hard-hitting, ribcage rattling Marshall-esque character, though with a softer feel and harder mid-range voice.

The V-40's overdrive gets grainier, thicker and creamier by the time you crank it past the halfway stage on the Drive and the master volume controls. We get more dirt and push from the midrange, not to mention colossal volume levels - the V-40 is certainly no bedroom delight, this thing is designed to rock on the big stage, even at low-volume levels.

Maxing the drive puts us firmly in the classic rock camp - for screaming modern rock or metal, Budda's Super Drive 45 Series II might be a better option. The V-40, however, delivers anything from thunderous Zeppelin rock rhythms to Cream or Peter Green wailing solos.

We found that the Thick control operates best as a lead enhancer; when it's engaged your solos will bulldoze through a band mix. Unfortunately, this feature isn't foot-switchable and can only be activated via the front panel.

Budda's 2 x 12 offers masses of presence when paired with the V-40 and really pumps out the low and mid-range frequencies with relentless force. It's a great platform for cleaner tones and really forces its way through a band mix, though in isolation it can sound a little hard.

Despite the recent upheaval in manufacturing, it seems that the Budda ethos of providing USA-made, boutique-style versatile rock amps for less than top-class money isn't lost on the V Series.

Sonically, the V Series offers something a little different to the rest of the Budda range: a gruffer voiced, old-school rock amp that's ferociously loud, yet retains the company's renowned crispy clean tone.

Still, there are plenty of rivals within the V-40's price bracket, not only the imported beauties from Budda's fellow boutique American manufacturers, but from our own amplifier brands, such as Blackstar, Marshall, Hi-Watt and Orange.

That said, if you want a reliable boutique-quality amp that can handle anything from glassy country cleans to AC/DC mean, with stadium-sized volume capabilities, this Budda should be of interest.

Now listen to our audio demo to hear the Superdrive Series II V-40 in action: