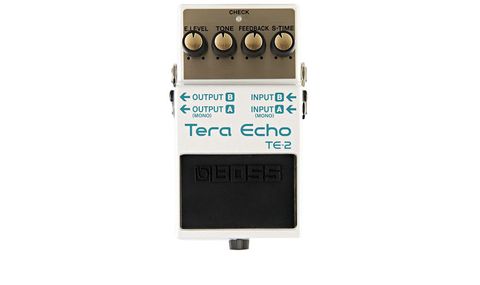 According to Boss, MDP analyses audio signals in many dimensions and applies ideal effects to each, resulting in new levels of dynamic response and expressiveness. Basically, Boss believes this pedal (and it's MDP siblings, the MO-2 Multi Overtone and DA-2 Adaptive Distortion) delivers a little magic that other pedals don't. Let's see if it does...

The TE-2 is actually a milestone in Boss history, being the 100th model in the compact series of stompboxes, which launched in 1977 with the OD-1 Over Drive. Boss says that it is designed to produce a dynamic new stereo ambience effect that goes far beyond traditional delay and reverb.

The pedal can be used as a standard mono stompbox, but has twin inputs and outputs, so stereo operation is a possibility. Four knobs adjust the sound - the first two set the level of the effect in your signal and tweak its tone, while the second two have a direct influence on the nature of the effect.

This is an odd one. What the TE-2 does is give us ambience that is neither conventional reverb nor delay, but has a distinct sonic signature with elements of both, combined with other processing. We could say that it's a delay pedal with weird repeats, but that doesn't do it justice.

Keep the S-Time at a minimum and you'll get slapback with the sort of bathtub reverb you'd get from dialling short delay times into an analogue echo - but with an extra dimension to it. Advancing the knob lets you hear more of what's actually going on - it seems to be delay that triggers a synth filter and ends up with a range of multi- taps.

What is crucial is how hard you hit the strings - this thing is very touch-sensitive. Whack it hard and you can really hear the filtering kick in, but pick gently and there's a nice swirling ambience that envelops your playing with an extra layer of crystalline sound.

This is a pedal that encourages you to really play the effect, dynamically controlling its ebb and flow - and it's a lot of fun. It also has a cool secret weapon: the Freeze function, whereby the effect sound is held for as long as you hold down the pedal switch.