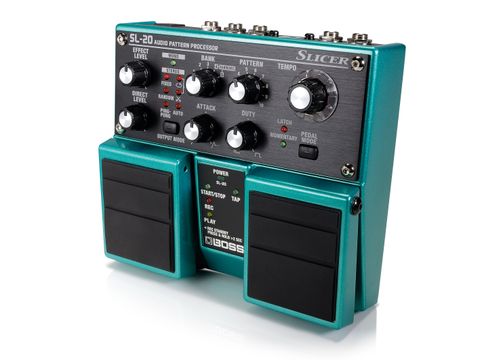 A creative yet immensely practical tool for chopping up your audio into rhythmic patterns.

Back in the days when we used to record everything onto tape, there was an interesting little technique that involved feeding the key input of a hardware noise gate with a drum machine or another rhythmic pulse with the aim of triggering the gate and chopping up or slicing an audio signal into a rhythmic pattern.

Of course, in these digital days there are plenty of computer-based ways to achieve similar effects, but the latest product from Boss puts it into a most convenient hardware form.

The SL-20 Audio Pattern Processor, aka Slicer, is the latest in the Boss Twin pedal series and is designed to transform any played instrument or recorded track into a percussive chopped groove.

The Slicer has 50 different slice patterns onboard, including a Harmonic Slicer feature that generates percussive melodies. It's a stereo unit that offers various panning options and plenty of control over the characteristics of the generated pattern. Other features include loop recording, tap tempo and sync to external MIDI Clock.

You also have practical control over the shape and size of each slice in a pattern via a pair of knobs. The Attack knob adjusts the pattern's attack while the Duty knob sets the duration from a small percussive segment to letting more of the original sound through.

The patterns themselves are in five banks of ten, selected by a pair of rotary switches. The overall tempo is also under knob control and is indicated by an illuminated ring around the knob that flashes red on every fourth beat and green on the others.

The largest features on the SL-20 are the twin footswitches. Although tempo can be set internally using the Tempo knob, the right footswitch is for tap tempo and can also be used to jump back to the beginning of a sliced pattern.

Although it has full stereo in and stereo out if needed, the SL-20 can be used in standard mono in/mono out stompbox mode or can generate a stereo output from a mono source.

The full potential is unleashed in stereo, as there's a choice of six stereo output modes with different panning functions. You can have a fixed stereo position, the sound panning between left and right either smoothly or as a bounce, or random movement between right, left and centre. Two of the modes produce a 3D effect; one is a swirling panner while the other moves the sound forward and backward as well as left and right.

Operation of the Slicer is pretty straightforward - it's a stompbox after all - with all the controls on the surface ready to go. Soundwise, there's plenty of variation within the 50 onboard patterns to keep you interested.

These vary from the sort of straightforward tremolo pulse you would find in a Fender guitar amp through to more sophisticated rhythmic stuff with the emphasis on particular beats. Some are fairly rigid like an old-style sequencer, some syncopated, while filtering creates a wah effect on some slices.

Things get really interesting when you get to the two Harmonic banks that can create melodic patterns from a chordal input. Bank 5 in particular creates patterns with a burbling sample-and-hold vibe.

With the variation in tempo available plus the ability to change the character of the slicing with the Attack and Duty knobs, there is a whole world of creativity at your fingertips and feet as the footswitch enables you to bring the effect in and out. Even more versatility is available by connecting up an expression pedal, which can be used for hands-free control of either the direct level, effects level, output level, attack or duty controls.

Boss probably see the Slicer as a pedal that guitarists can use in a live performance, but its capabilities go way beyond that. It's an extremely convenient and easy to use tool that can transform sound and create something entirely different from any electronic instrument or any piece of recorded music input.

The SL-20 Slicer is a great rhythmic performance tool. It may be aimed primarily at guitarists and more band-orientated performance but keyboard players and DJ's could definitely find a home for it. It would undoubtedly dial in an extra dimension to anyone's gigging sound but would also be a fine asset for any studio

This is a practical piece of outboard for adding subtlety and movement to sounds, and we can't get enough of all those panning options.

Listen to the SL-20 doing its slicing thing: