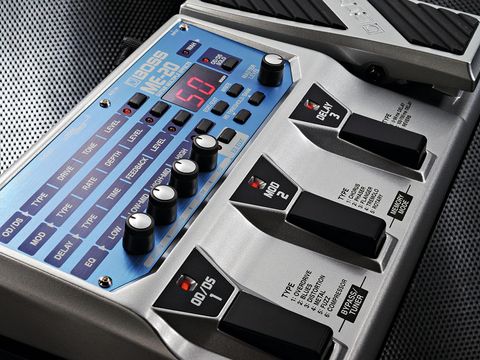 For first-time buyers to semi-pro gigging guitarists, this streamlined unit will appeal to many players. Time to rethink your set-up?

The intrinsic quality of Boss gear has been etched in stone since the very first compact pedals that we still know and use today wowed the world in 1977.

This newest addition to the ME range is a straightforward, plug-in-and-play unit. It's based around a trio of basic effect types - overdrive/ distortion, modulation and delay - which are accessed via their own small footswitch sited at the front of the panel.

You can dial in many different effects and sub-parameters of the same to produce either a bespoke combination or one that acts as, in reality, three independent Boss pedals. The latter can be set-up using the unit's manual mode, while memory mode allows you to call up 30 presets, into which you can program differing sounds and combinations in the fashion that we're all accustomed to.

Each type includes just about all effects you could reasonably require - does anyone actually use a ring modulator for more than one song? For example, the Modulation Type includes chorus, phaser, flanger, tremolo and rotary.

To change the parameters, you simply press the relevant select button and from there, alter the type, rate, depth and level with the specific member of the quartet of silver parameter controls.

As ever, the process is far simpler than it reads here, and we were grateful to be spared the tiresome process of scrolling through edit windows that we see on more advanced processors.

By far the most useful feature, and one that speeds up the editing procedure considerably, is the EZ Edit function. Boss has included an impressive number of settings that you can choose to activate without even a single twist of a knob; overdrives with different gains, delays with different time and feedback values, items of that order.

Simply press the EZ Edit button, choose the basic settings from the manual and away you go. It's then possible to fine tune proceedings in the normal way.

In manual mode, you're 'stuck' with the three types of effects you choose at any one time; i.e. you can't change from one effect type to another within the same grouping on the fly - for example chorus to phaser - without bending down and fiddling.

However, Memory mode really opens up the sonic possibilities, and the three footswitches change their operation to patch selectors within any of the 10 onboard banks selected via the dedicated Bank button.

The unit includes a master volume, which is always useful, and other 'hidden' features include an onboard noise suppressor, compressor and tuner, as well as the more conspicuous expression pedal that can be used for either volume or wah.

One feature we can really see the potential of is the OD/DS Solo function, which provides a hike in output allowing your carefully hewn solos to be heard above your band. It's accessed via a button that's too small to be realistically available while playing onstage, so we'd suggest that it'd be best used in Memory mode.

Here you can program a dirty tone, copy it to the adjacent patch albeit with the solo function and use it to give yourself an easy and effective boost.

That said, you can pick up various optional footswitches that allow you to use the function remotely as and when you need it. But this turns on the OD/DS type whether you've chosen it or not: a clean boost this isn't…

The ME-20 is heavier than it looks and the metal chassis certainly seems robust enough to survive an onstage boot battering. Power comes from six AA batteries or an optional PSU.

The single most obvious potential downside of going with a non-modelling system is that our ears have been rather spoiled by some very realistic and wildly different tones of late. Fortunately, Boss has come up trumps yet again and the quality of the effects, while straightforward, sound perfectly fine to us.

Using the unit through a Laney VH100 stack, a Carlsbro TC60 and with headphones, and we have no complaints as far as the performance goes. As we'd predicted, the Solo function is extremely useful and it'll transform a versatile amp into something even more valuable for gigging scenarios.

Solo volume hikes should never be underestimated and to use one that actually lives up to what you'd hoped for is a rare find.

The higher distortions tend to get a bit fizzy before tailoring from the EQ section, while the clean modulation and delay combos are swimmy, throbbing and swirly, depending on which type you actually go for.

We should mention here that the Delay Type also includes a huge reverb and the fact that the unit's structure doesn't allow its amalgamation with the actual delays is just about the only blot on the copybook.

Highlights include a suitably Hendrixian modulation, courtesy of a slow and deep phaser and the EZ Edit's Blues 1 overdrive. With a spot of gain on the amp, the customary Edge/Andy Summers heavy chorus and delay settings are always excellent and we are hard pushed to find a tone that we don't like.

If you are used to the wonderful world of modelling, or are searching for a processor that you could use for direct recording, the ME-20 is probably not for you. If, however, you're on a budget after blowing your wad on a decent amp and would still appreciate some additional versatility, this requires some serious consideration.