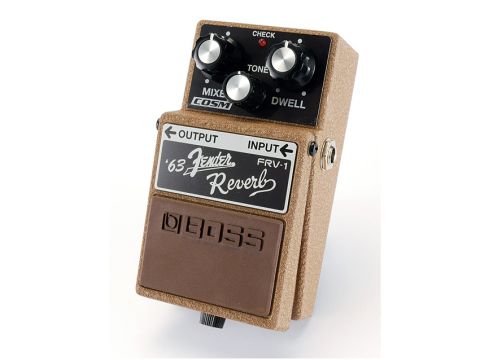 From subtle ambience to surf, this does the business.

We checked out the first two members of the Boss Legend Series previously and, although we were struck by how good the FBM-1 and FDR-1 were, we did have some doubts as to the reverb of the '65 Deluxe Reverb pedal.

Here, Boss applies its huge know-how - not to mention the bespoke COSM technology - to provide a vintage-flavoured Fender-style reverb without any amp modelling. Gone are the smaller knobs, dual-concentric pots and so on, replaced by a three-knob layout along the same lines as the classic SD-1 or DS-1.

The knobs here comprise a Mixer to balance the dry and wet signal, a tone pot for smoothing-off the reverb's rough edges, which we didn't find especially appealing, and finally a Dwell pot.

The latter is the secret to the pedal's tonal success as it also enables you to alter the richness and, for want of a better word, twangy character. Obviously, there's no genuine spring used here, but that said, the pedal is, tonally, incredibly convincing.

Classic Fender reverbs are warm and lush, and recreating such organic tones can be a difficult one for solid-state units to pull off. Here, though, the FRV-1 twangs in spades, with everything from a subtle enhancement all the way to full-on Dick Dale madness faithfully at your boot tips; even the 'pop' caused by pick attack is recreated.

As long as you balance the tone with your dry amp signal, you'll get a huge amount from this pedal. It's a compromise but, for general gigging and recording, this is as authentic as it's likely to get.