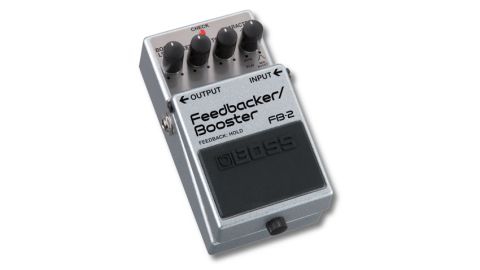 There's no shortage of boost pedals out there, so including the feedbacker takes this stompbox from fairly ordinary to downright desirable.

Boss has never been short on new stompbox ideas, but its latest could prove especially savvy: combining a traditional boost pedal with a wail-inducing feedback enhancer.

When you're rocking out onstage, there's nothing cooler than posing heroically in front of a wall of Marshall stacks and ringing out the last note of your solo with a hefty dose of feedback. The problem is that feedback at sensible volumes is notoriously hard to control.

That's where the Boss FB-2 comes in. Just hold down the footswitch, and waves of sustain and feedback will hum out of your speakers as if by magic. The feedback knob controls how easy it is to start the effect, but since it induces real feedback (unlike some oscillator-driven pedals), it won't work through headphones.

A cool side effect, however, is that if you keep your foot held down and keep playing, you end up with a half-cocked wah sound.

While the feedbacker is an awesome feature, and likely the stompbox's main selling point, the FB-2 is a pedal of two halves, and the second of these is a flexible booster. The character knob on the far right takes you from up to 20dB of flat boost through to various mid-boosts designed for lead tones, up to 38dB at max settings.

The only black mark is that you can't initiate the feedbacker without the boost, but the FB-2 is still a smart move by Boss.