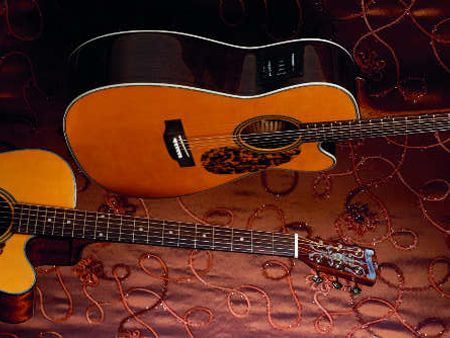 A guitar with quality - whether of construction, finishing, handling, sound or vintage-evoking elegance - to compete at any level.

Blueridge guitars, in particular the all-solid wood Historic and Prewar series, have attracted much praise over the years. This hasn't been just for sound quality and the instruments' vintage-Americana aesthetics, but also because their high-grade specifications are offered at sensibly affordable prices courtesy of Chinese manufacture.

Hallmark cosmetics like amber-tint tops, 'dalmatian' pickguards and elaborate pearl-inlaid pegheads also help make the Historics and Prewars distinctive parts of the Blueridge catalogue. Until recently Blueridge's line-up - based almost entirely on dreadnought and 000 designs - was a wholly acoustic one. Now, however, a few selected models are being added as electro-acoustics, including this Historic series cutaway 000.

The official website specifies a Fishman Prefi x Plus system but our sample carries the cheaper Classic 4 preamp. Nothing wrong with that - it's a straightforward, dependable system.

Apart from installing the electrics, Blueridge has essentially taken its regular BR143 folk and fashioned in a Venetian cutaway for full access to the 20-fret fingerboard.

The back and sides of this 15-inch wide instrument are solid mahogany and are stained, along with the mahogany neck, to a deepish brown prior to lacquering. The solid Sitka spruce top - an excellent-looking example with close graining and richly cross-silked - carries a vivid amber tint, or 'aged toner' as the company likes to call it.

One or two Blueridge tops we've seen have frankly been too perma-tanned in colouring, but this one stops short of that while still endowing a rich vintage-like aura. Buffing of the gloss finish is immaculate.

Part of the Historic theme lies hidden, the top being strutted with prewar-style, forward-shifted X bracing. This might be a nod towards traditional authenticity, but it's also a mite ironic since Martin, for example, moved its further back in 1940 to compensate for the stress of the heavier-gauge strings then starting to be favoured by players. Never mind: it's all neatly done, and scalloped by hand, apparently.

The most obvious blast from the past is the pearl and abalone-swathed headstock, reminiscent of the kind of inlay finery you'd increasingly have seen on guitars during the early part of the last century. The complex floral/urn motif is stunning, and it must be thanks to laser-cutting technology that such decoration can be included on a guitar of this price.

It sits beautifully on the compact peghead - and so do the open-geared Grover 'Sta-tite' machineheads - but there is a design drawback hereabouts. Because of the headstock's petite narrowness, the string path is constricted, to the extent that the B and A strings are actually touching the posts of the top and bottom E tuners as they pass. Happily, this situation doesn't cause any tuning problems, but it does look muddled.

On a retro-inspired acoustic you might expect a quite chunky, broad neck, but Blueridge bows to modern mainstream sensibilities with one that's not only of regular width but also has a distinctly shallow profile starting at under 20mm deep.

Coupled with well-dressed fretting it's a delightfully slick player as a result, especially for those of us with smaller hands, and the only potential buyers who might demur from that opinion are those specifically looking for something with a more substantial, overtly vintage grip.

Some fingerstylists might wish for slightly wider string spacing at the bridge than the 53.5mm has on offer, but in truth the guitar is a perfectly obliging picker, in the Yamaha/Takamine mould. Linked to a Fishman Acoustic Matrix under-saddle pickup, the Classic 4 preamp is conveniently mounted forward of the waist and provides a simple, all-slider array embracing four-band EQ and volume.

The control panel can be unlatched for a quick battery change.

Though it doesn't have a large or especially deep body, the BR143CE delivers an amazingly responsive sound. In sheer acoustic volume it's louder than most folk size guitars you'll come across - certainly at this price - and it's coupled with a springy yet crisply-defined voicing and a degree of warmth and depth from the low end that is surprisingly, and rewardingly, robust.

Some originally non-cutaway designs suffer from acquiring a cutaway, but not this one. In auditorium terms it's a little belter. No worries when plugged in, either. The Classic 4 takes to its task effortlessly, providing a versatile tonal palette, plenty of gain (and a wellbalanced piezo output), and all the while retaining the guitar's acoustic zest and clarity.

A modicum of care needs to be taken with treble and brilliance not to let the top end assume a brittle edge but, having allowed for that, the quality of powered performance is right on the money.